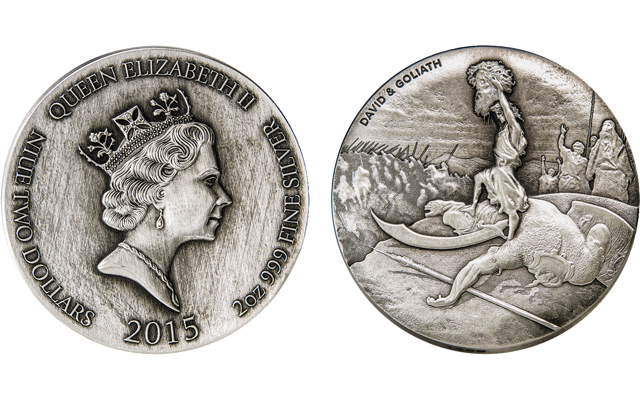 Scottsdale Mint and American Precious Metals Exchange have issued the third coin in a new Biblical silver coin series. The 2015 silver $2 coin presents the story of David and Goliath. 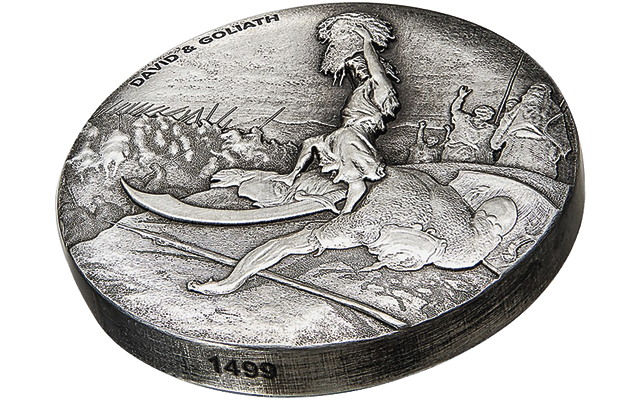 Serial edge numbering on each 2015 David and Goliath $2 coin from Niue is capped at the 1,499 mintage limit for the issue.

One of the most well-known biblical tales is now presented on a silver coin issued in the name of the island nation of Niue.

The private Scottsdale Mint on May 5 released the third coin in its Biblical silver coin series, which is intended to feature six coins per year for the next 10 years.

Each 2-ounce .999 fine silver coin will depict a well-known biblical story minted in high relief and accented with an antique finish.

This third release, dated 2015, features a dramatic depiction of David after defeating Goliath. David faces the fleeing Philistine army, holding the giant’s head above his own, while backed by the Israelite army.

Gustave Doré’s engraving David and Goliath is the inspiration for the reverse design.

Each coin is serially edge numbered.

The coin was struck by the Scottsdale Mint for American Precious Metals Exchange, the exclusive distributor.

The 2015 $2 coin from Niue weighs 2 ounces, measures 39 millimeters in diameter and is 6 millimeters thick.

It has a mintage limit of 1,499 coins and follows the Exodus coin, the first in the series, and a Crucifixion coin, the second.

The coin retails for $179.99, but pricing varies depending on payment method.