Danish coin for campaign against tuberculosis in August auction 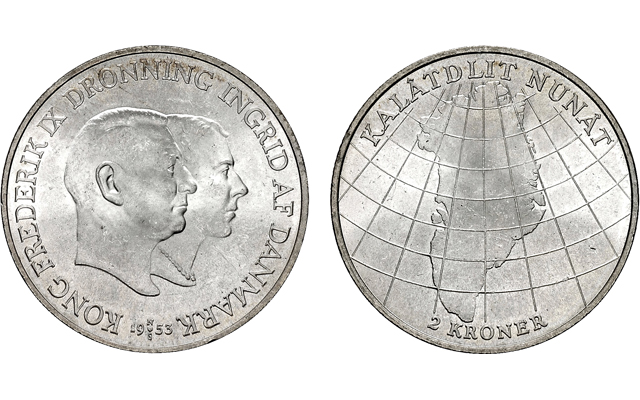 Denmark’s 1953 commemorative silver 2-kroner coin is generally uncommon, and none is finer than this Mint State 64 example graded by Numismatic Guaranty Corp.

The themes of modern commemorative coins often draw criticism from collectors who shun the sometimes colorful or thematic issues as “gimmicks.”

One now classic 20th century commemorative coin, however, is probably unique in honoring a very specific topic of global health.

An example of the 1953 silver 2-kroner coin from Denmark, which commemorated a campaign against tuberculosis in Greenland, is part of the Richard Lissner Collection.

Classical Numismatic Group, St. James’s Auctions and M. Louis Teller are auctioning the collection on Aug. 1 and 2, in Chicago. Lissner’s collection is remarkable for the breadth of condition rarity pieces, according to the auction firms, and the Danish coin is no exception.

The coin has a mintage of 151,710 pieces but none is graded higher than this Mint State 65 example encapsulated by Numismatic Guaranty Corp., according to the auction firms.

The coin shows King Frederik IX and Queen Ingrid on the obverse, and a map of Greenland on the reverse.

Greenland is an autonomous country within Denmark and, according to the World Health Organization, tuberculosis plagued the nation in the 1950s before falling dramatically, no doubt in part to the campaign honored on this 31-millimeter-diameter coin.

For more information about the Lissner Collection, telephone CNG at 717-390-9194 or visit the firm’s website.