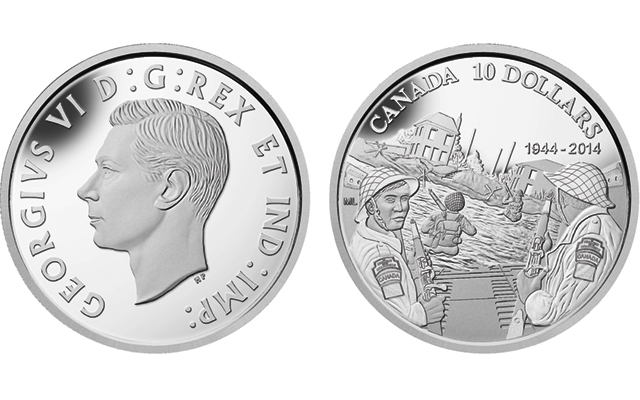 A new silver $10 coin from Canada honors the service and sacrifice of that nation’s soldiers that landed on Juno Beach during the June 6, 1944, military assault known as D-Day. The Allied effort helped retake Europe from Nazi occupation and was pivotal in securing Allied victory in World War II.

The Allied assault on Nazi-occupied France is honored nearly 70 years after the historic day now known as D-Day with a new Proof silver $10 coin from Canada.

The reverse of the half-ounce silver coin shows a point-of-view or first-person view of the attack on Juno Beach as Canadian soldiers witnessed it on June 6, 1944. Some 1,074 Canadian soldiers died during the D-Day assault, according to the Canadian War Museum.

Canadian infantry soldiers are seen in full battle gear as they disembark from a Landing Craft Assault vehicle and make their way to what was code-named Juno Beach. In the foreground, one soldier looks ahead at the action while another at left looks back toward the viewer, as though the viewer, too, is about to wade into the low Atlantic tide. The precariously angled horizon in the background recreates the rough sea conditions, as the transport vehicle and its occupants are tossed by tall waves just off the shores of Normandy.

The reverse design, by Maskull Lasserre, “serves as a heartfelt tribute to the Canadian veterans of the Second World War, and their enduring legacy of service and sacrifice in Normandy and beyond,” according to the RCM.

The .9999 fine silver coin, with a mintage limit of 8,000 pieces, is the lowest mintage half-ounce silver coin from the RCM and, at its Mint issue price of $49.95 Canadian, costs less than most, if not all, of the other current Canadian commemorative issues of comparable “silver dollar” size.

The invasion of the beaches of Normandy allowed Allied forces to establish a foothold in Western Europe and open up another battlefront (in 1944 Germany was fighting Russia along the Eastern Front, and locked in battle with Allied forces along the Italian peninsula), thus paving the way to Allied victory.

The obverse carries the effigy of the reigning monarch during World War II, King George VI.

The coin weighs 15.87 grams and measures 34 millimeters in diameter.

U.S. prices for collectors in the United States buying from the RCM fluctuate with the exchange rate, calculated at the time of purchase.