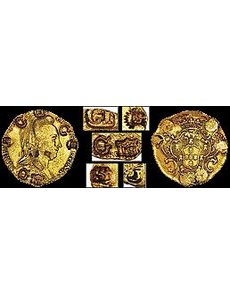 A 1788 gold 6,400-real coin of Brazil is “almost certainly” the only countermarked coin to have been marked as circulating in three different islands, according to Dix Noonan Webb, which on Nov. 17 is auctioning the second part of the Edward Roehrs Collection of Cut and Countermarked Coins of the West Indies.

The second part of the Edward Roehrs Collection of Cut and Countermarked Coins of the West Indies is offered in Dix Noonan Webb’s Nov. 17 auction.

The sale, the 96th for the London firm, is highlighted by a gold coin of Brazil that actually circulated across three different authorities in the West Indies, “almost certainly the only treble-island Curacao countermarked gold coin,” according to the auction catalog.

The 1788 gold 6,400-real coin of Maria I was issued as a 66-shilling coin in Curacao under the authority of J.K. Lauffer circa 1799 to 1803 before circulating in St. Vincent and Grenada. The countermarks represent an old-fashioned sort of “Where’s George” function, in providing evidence of where the coin circulated.

Roehrs built his collection across some 50 years, beginning in a time when few collectors pursued the area as a specialization. “Overall, it must rank as the most comprehensive assemblage of West Indian cut and countermarked gold and silver pieces, regal coins, tokens and medals ever formed,” according to the auction firm.

Roehrs died Dec. 7, 2008, and on Aug. 13, 2010, Heritage Auction Galleries offered the American U.S.-regulated gold pieces once owned by Roehrs. Dix Noonan Webb on Sept. 28, 2010, offered the first part of the Roehrs Collection of Cut and Countermarked coins, with a collection of medals related to the West Indies and the slave trade sold July 13, 2011.

All lots in the Nov. 17 auction are subject to 20 percent buyer’s fee.

The complete sale catalog can be viewed online at the firm’s website, www.dnw.co.uk.

Anguila, Anguila Charter Co., circa July 1967 $100 LIBERTY DOLLAR counterstamp on 1947 gold 50-peso coin of Mexico, one of “only two struck,” produced by Scott Newhall (then editor of the San Francisco Chronicle) as part of a fundraising effort post-separation from the associated states of St. Kitts-Nevis-Anguilla, Lot 466, “coin and countermark Extremely Fine.”

Jamaica, Authority of November 1758, gold doubloon (valued at £5), on a 1751-LM gold 8-escudo coin of the Viceroyalty of Peru under Ferdinand VI, “only about 10 specimens recorded,” “both sides centrally countermarked with floriate GR raised within a circular indent,” 26.92 grams, Friedberg 1 (Gold Coins of the World by Arthur L. and Ira S. Friedberg), Lot 382, coin VF, countermarks Fine.

Martinique, authority of September 1805 gold 22-livres per gros, on a 1727 gold 12,800-real coin of Brazil under John V, Minas Gerais, countermarked 22 above eagle raised within a shaped indent, 23.01 grams, “the only recorded Martinique countermark on a ‘Double Joe,’” Lot 522, “coin About Fine, medium clip around the edge and countermark” VF.

Virgin Islands, circa 1798 gold 66-shilling coin of 8 pennyweight standard, on counterfeit 1769 gold 6,400-real coin of Brazil under Joseph I, Rio Mint, “countermarked RC raised within a rectangular indent on a large central plug,” 12.44 grams, Lot 407, “coin and countermark fine but latter rather crude.” ¦