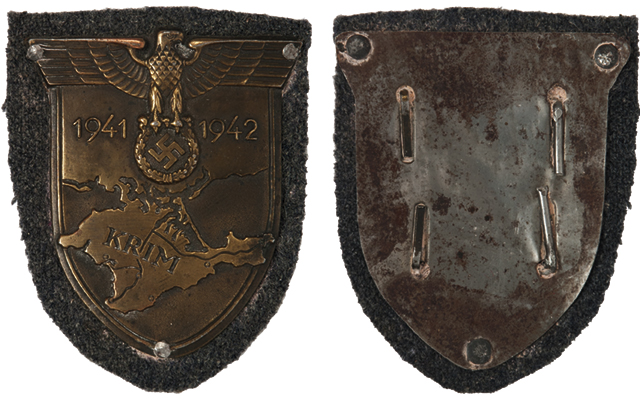 The Crimea Shield was instituted on July 25, 1942, for “members of the armed forces who between 21 September 1941 and 4 July 1942 were honorably engaged in the fighting in the Crimea either on land, or in the air, or at sea.”

The world’s headlines and television screens have followed Russian President Vladimir Putin’s detachment of the Crimean peninsula from Ukraine and its effective return to the Russian rule it knew from 1783 to the early 1990s. Numismatists can find Crimean coins of ancient Greek colonies, followed by Byzantine, Tatar and Turkish coins that followed, ending with the copper coins of the last khan, Shahin Giray bin Ahmad Giray (1777 to 1783).

The 20th century offered few modern Crimean collectibles, but one notable item is the Crimea Shield, awarded to German troops occupying the peninsula in the first, victorious phase of their invasion of the Soviet Union in the summer of 1941.

Commanding the swift seizure of this strategic region was Gen. Erich von Manstein, promoted to field marshal after the conquest of this region and its warm-water ports in the Black Sea. Battle shields were first awarded to German troops who seized the Norwegian port of Narvik.

The Crimea Shield was instituted on July 25, 1942, for “members of the armed forces who between 21 September 1941 and 4 July 1942 were honorably engaged in the fighting in the Crimea either on land, or in the air, or at sea,” according to See Juergen Brinkmann’s Orden und Ehrenzeichen des Dritten Reichs.

Recipients had to have served in the area at least three months, taken part in at least one major engagement or have been wounded. These strict requirements were intended to frustrate junketing German officers from claiming yet another award for a brief visit to the embattled peninsula.

This Krimschild was worn on servicemen’s uniforms on the upper left arm, as well as the political uniform of Nazi Party bigwigs. If two awards were received, both were worn, one above the other.

Designed by Richard Klein, known to militaria collectors as “Pinback Klein,” the shield bears a relief map inscribed KRIM with the mainland above bearing dates 1941 – 1942, topped by the spread-winged Nazi eagle perched on a swastika. The shield consists of two separate pieces of metal riveted together, with the cloth of a uniform sandwiched between the pieces.

Battle shields were not numerous, as Adolf Hitler fanatically opposed retreat or the escape of besieged armies such as the forces at Stalingrad. No retreat meant few or no survivors to receive awards of any kind. Tens of thousands of German POW’s became slave laborers in the USSR, held through the 1950s.

By March 1944, the Soviets had recaptured Crimea and the Krimschild was relegated to history.