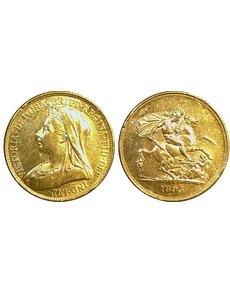 Counterfeit British 1893 £5 gold coin was likely once in a jewelry bezel, judging by the damaged rims. 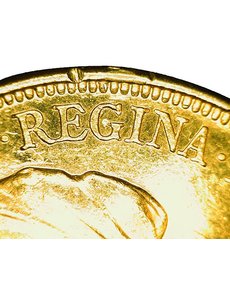 While the piece’s finer details are fairly sharp, the bottoms of the peripheral letters are curved and rounded, evidence of being struck with insufficient edge pressure. 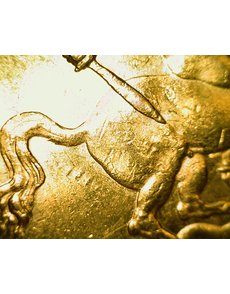 Diagonal dents in the field behind the horse’s hindquarters were contact marks on the genuine model coin used to produce the fake dies.

One of the more valuable resources ANACS has in its library is a series of counterfeit reports issued by the International Bureau for the Suppression of Counterfeit Coins.

This set contains more than 400 reports on fakes from all over the world, and includes diagnostics for every piece listed.

Since the IBSCC reports cover a wide array of fakes, when we encounter a fake world coin that is not listed in the series, we document it for future use.

Such is the case with the counterfeit Great Britain 1893 gold £5 coin illustrated here.

Judging by the damaged rims, this coin was probably in a jewelry bezel at one point in its past. This by itself is not an authenticity diagnostic, since both genuine coins and fakes have been turned into jewelry pieces.

Being in jewelry does tend to damage the coin’s surfaces and remove any remaining luster, which makes authentication a bit more difficult.

While the coin’s finer details are fairly sharp, the bottoms of the peripheral letters are curved and rounded.

This effect can also be seen on genuine error coins, such as off-center, broadstruck or incomplete planchet pieces.

In each case the retaining collar does not exert proper pressure, and metal flows outwards instead of up into the lettering.

The other diagnostic for this fake is a group of diagonal dents in the field behind the horse’s hindquarters.

These “depressions” were contact marks on the genuine model coin used to produce the fake dies.

They were transferred from the model coin to the dies, and will show up on all the fakes struck from these dies.

I would like to extend special thanks to collector Theo Gould for graciously agreeing to share this counterfeit with the numismatic community.