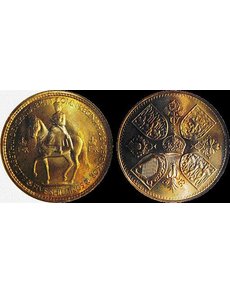 As 2012 marks the Diamond Jubilee of Great Britain’s Queen Elizabeth II, several world mints are producing commemorative coins to celebrate her 60 years on the British throne.

Typically those mints are located in countries within the Commonwealth of Nations, a collective of 54 states, many of which were once colonies of Britain. Queen Elizabeth II carries the title “head of the Commonwealth,” inherited from her father, King George VI.

One of the most intriguing jubilee issues was produced at the Pobjoy Mint, featuring a diamond-shaped silver commemorative half-crown authorized by the Isle of Man government.

Queen Elizabeth II merits a diamond inset to mark her jubilee, as she is only the second British monarch to reign for so long. Queen Victoria, who ruled 63 years, was the country’s longest reigning monarch.

I do not as a rule collect British coins, but I follow their designs and, on occasion, add a commemorative to my collection. One of my favorite world coins is the Royal Mint’s copper-nickel 1953 commemorative crown of Queen Elizabeth II’s coronation.

Traditionally, crowns (or 5-shilling coins) are struck in silver. That practice was ended in 1947, with the exception of Maundy coinage (covered in my column in Coin World’s April 18, 2011, issue).

My 1953 crown — cost $35 — was purchased five years ago at an Iowa coin show and sent to Numismatic Guaranty Corp. for encapsulation.

Though copper-nickel, the coin is spectacular because of its intense rainbow toning.

The obverse features Queen Elizabeth II riding a horse. The reverse displays the shields and flowers of the nations of the United Kingdom, with a crown in the center.

Some numismatists maintain that “Defensor” is the proper title used for kings while “Defensatrix” is used for queens, thereby making the 1953 commemorative an error coin. I have seen the term “Defensatrix” used on world medals, including a 16th century piece of Queen Mary I, cast by engraver Jacopo da Trezzo.

The Royal Mint typically abbreviates FIDEI DEFENSOR as F.D. or FID. DEF. Most Commonwealth countries omit the phrase, as they have no official state religion. (The Church of England was founded in 1534 during the reign of King Henry VIII.)

Ironically, in 1521, the Roman Catholic church had declared Henry “Defender of the Faith” because he published a pamphlet against German Protestant reformer Martin Luther.

Do you see why home hobbyists should collect world coins? Prized for their beauty, even in copper-nickel, they often inspire a love of history and art history, and conversation at coin clubs and dinner tables.