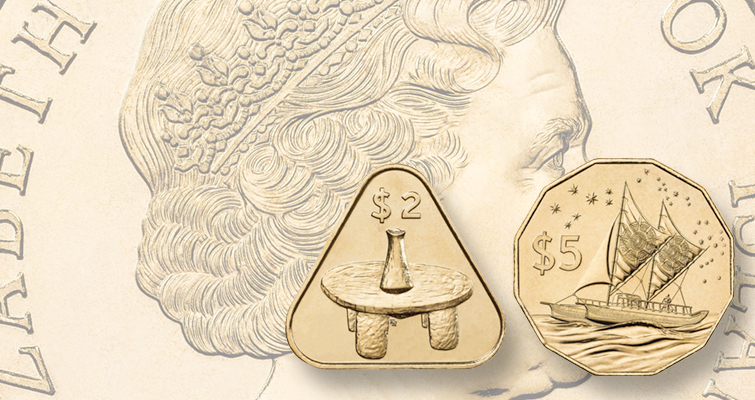 New lighter circulating coinage has begun appearing in the Cook Islands, including the traditional triangular $2 coin and a new $5 coin depicting a vaka, a sailing boat, under sail.

Collectors have long been able to buy noncirculating legal tender coins from the Cook Islands, issued by various private and national mints under license from the tiny archipelago in the Pacific.

But in August, the Cook Islands issued a new series of its own circulating coins, as part of a currency reform coordinated through the Royal Australian Mint. It was the third such reform and relaunch completed by the RAM for a Pacific Ocean nation within about a month, joining changes for Tonga and Vanuatu (Coin World, Aug. 31 and Sept. 14 issues).

The new coins maintain the same designs as the Islands’ previous series, and include the famous $1 coin depicting a fertility statue and the triangle-shaped $2 coin. The coins range in denomination from a 10-cent piece to the new $5 coin, this a new denomination of circulating coin for the nation, making it the Cook Islands’ highest denomination coin.

The 10-, 20- and 50-cent coins are composed of nickel-plated steel and are silver in color.

The $1, $2 and $5 coins are composed of aluminum-bronze and are golden-colored.

The $5 coin reverse depicts the traditional sailing boat, known as a vaka, in full glory on the open seas with the constellations by which the Cook Islands peoples navigate.

Old Cook Islands coins will remain legal tender through Jan. 31, 2016, after which time only the new coins or current New Zealand coins will be accepted for payments in cash transactions.