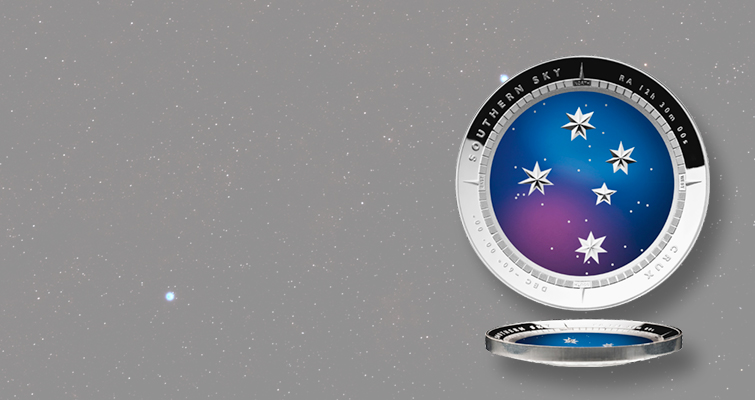 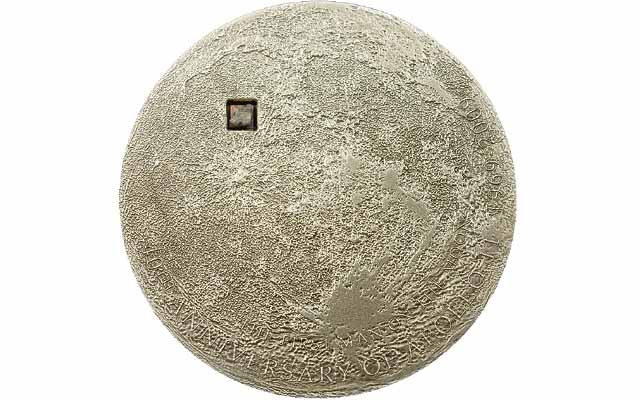 A 2009 coin from Congo celebrating the Moon includes a piece of the lunar surface on the obverse. The coin now sells for an astronomical $500, after being issued for less than $100.

Editor's note: The following is the second part of a multi-part Coin World series about the prominence of space-themed collector coins from all over the world prepared by Louis Golino for the October 2015 monthly edition of Coin World.

Technology is being used to shape coins to resemble constellations and to even to include pieces of meteors that crashed through the Earth's atmosphere.

In 2012 the Royal Australian Mint issued another world first: the first colored and dome-shaped modern coin, the Southern Crux star constellation silver $5 coin, which was the first in a three-coin award-winning series focused on Southern Sky constellations.

The 2012 coin was an instant hit with collectors and sold out of its mintage of 10,000 coins quite quickly. Issued at a price of about $100, the coin sells today for $500 or more, which is not typical for modern world coins — they actually decline in value in many cases.

It is also worth remembering that the 2009 French and 2012 Australian curved coins were so well made and at the time so unique that they served as models for the U.S. Mint’s production of the baseball coins.

One of the first steps the U.S. Mint took was to produce experimental and test pieces and also to consult with officials at the French and Royal Australian Mints about how they were produced.The Southern Crux coin was honored with awards for engineering excellence in 2013 and was named international coin of the year in 2014.

The Pavo and Orion coins, the second and third issues in the Australian series, are also popular, but not yet to the extent of the Southern Crux issue. That seems to be a result of a combination of the Southern Crux coin being the first coin of a series, and the fact that collectors were so taken with its combination of a blue sky and silver stars. Nevertheless, the other two coins have definitely already seen some appreciation in value and will probably go up further over time.

The year 2014 marked the 450th anniversary of the birth of Galileo Galilei, the founder of observational astronomy and of modern physics and modern science.

Russia issued a 5-ounce 25-ruble coin in silver and a colorized silver version; the Congo issued a 1-ounce silver coin that is convex on one side showing a colorized image of Galileo and the solar system, and concave on the other, which depicts the surface of the moon; and the Cook Islands produced a 2-ounce silver coin that has an image of Galileo on it and uses a piece of moonstone to depict the moon.

Coins about meteors that include actual pieces of meteor are another space-related type of coin that is popular with collectors.

Beginning in 2012 Fiji has been issuing a series of coins with real pieces of meteorites from various locations around the world. In 2014 the Cook Islands released the Moldavite meteorite coin as the 10th anniversary issue in a meteorite series issued by the private mint, Coin Invest Trust, which makes coins for various countries. It has a piece of bottle-green colored meteor at the center and is curved on the side showing the crater where a meteor landed in Bavaria 15 million years ago. The coin has a mintage of 2,500 coins.

In 2014, Niue started a meteorite coin series minted in high relief by the Mint of Poland.

The coins contain actual pieces of meteorite from famous locations around the world. The first coin honored Canyon Diablo in Arizona, where a meteor landed 50,000 years ago.

The second coin honors Wolfe Creek, located in Western Australia, where a meteor landed 300,000 years ago. Both coins are done in an antique silver finish and depict their respective meteor craters and have a mintage of only 666 coins.