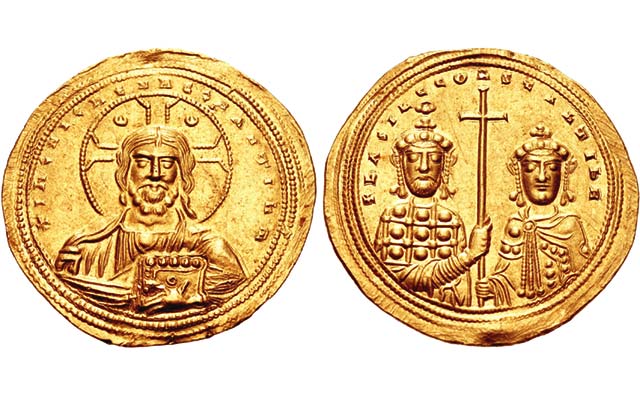 Zoe’s uncle Basil II and her father, Constantine VIII, are shown opposite Jesus Christ on this gold histamenon nomisma of circa A.D. 1005 to 1025. They co-ruled the Byzantine world. 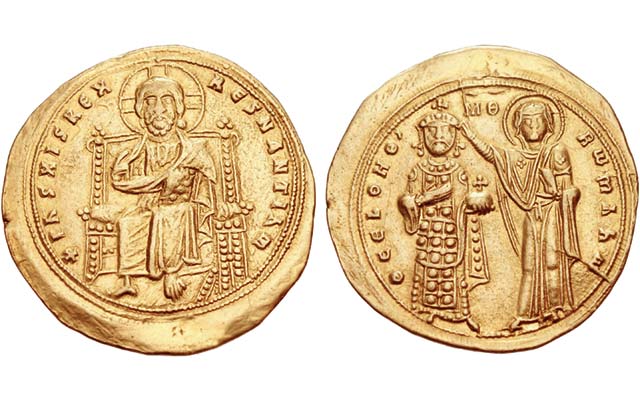 Romanus III, 1028 to 1034, the first husband of the Empress Zoe, is crowned by the Virgin Mary opposite an image of Jesus Christ on this gold histamenon nomisma. 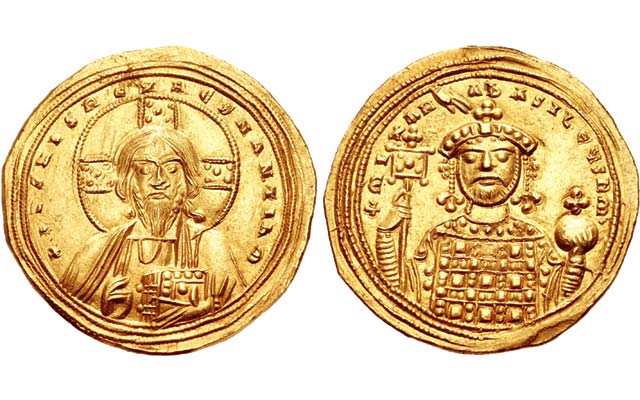 The hand of God (manus Dei) crowns Zoe’s second husband, Michael IV (1034 to 1041), on this histamenon nomisma. The obverse shows the facing bust of Jesus Christ. 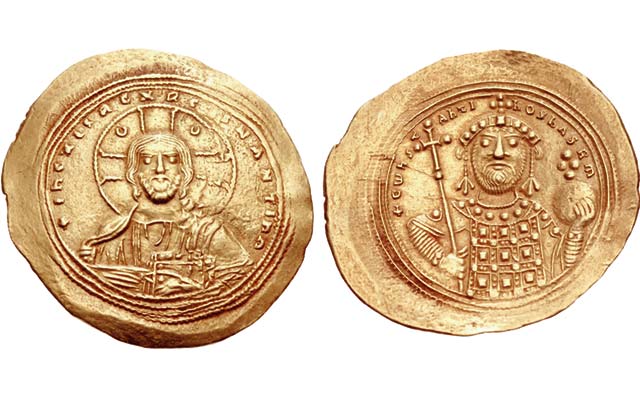 Zoe’s third (and final) husband, Constantine IX (1042 to 1055), is portrayed opposite Jesus Christ on this histamenon nomisma, the standard Byzantine gold coin of the era. 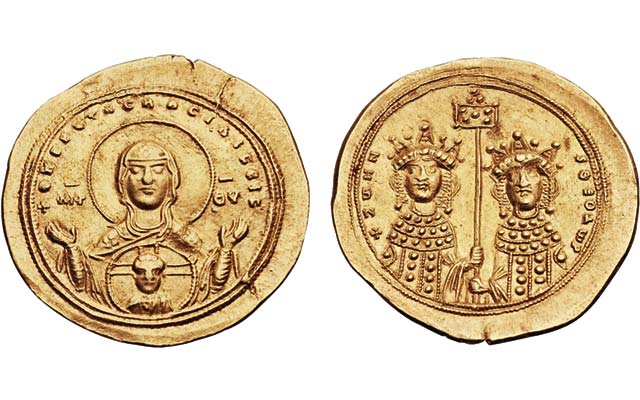 The sister-Empresses Zoe and Theodora are shown opposite the Virgin Mary with a Christ medallion on this histamenon nomisma struck for their joint-reign in 1042.

In about A.D. 978, a daughter, Zoe, was born to the Byzantine Emperor Constantine VIII, who then co-ruled with his elder brother, Basil II (976 to 1025). Since Zoe’s father was a reigning emperor, she was born “into the purple” (porphyrogenita), an exalted status that few in the Byzantine world enjoyed.

The 11th century chronicler Psellus describes Zoe as a woman of exceptional beauty, whose pedigree and beauty were her principal assets. Her younger sister, Theodora, is described as plain in appearance, yet possessing a sharp intellect.

Two marriages to Holy Roman Emperors were arranged for Zoe early in her life, but both failed to materialize. Thereafter, she did not marry until age 50. In the intervening years, Zoe lived in the palace’s women’s quarters (the gynaeceum), apparently engaging in frequent adulterous affairs.

In 1025 Zoe’s uncle, the emperor Basil II, died, leaving Zoe’s father, Constantine VIII, as sole emperor. Three years later, when he neared death, a marriage was urgently sought for both of his daughters to preserve the family dynasty.

The elderly urban prefect of Constantinople was chosen, even though he was a relative and had to divorce his current wife to make a new marriage possible. The youngest daughter, Theodora, was Constantine’s first choice, but she refused.

The choice then fell upon Zoe, and in the last days of Constantine VIII’s life, in 1028, Zoe was married to the prefect, who became the next emperor, Romanus III (1028 to 1034).

By this stage of her life, Zoe had grown to despise her sister, and upon becoming empress she compelled her husband to send Theodora to a monastery, where she was forced to take holy orders. In the meantime, Zoe sought magical formulas to become pregnant, but it proved impossible. This, along with her continued adulterous affairs, drove a wedge between Zoe and her husband.

Romanus III grudgingly overlooked his wife’s affairs, until one, with a nobleman named Michael, was so serious that rumors circulated that it would lead to a palace coup. Michael denied the implications.

When Romanus III was found dead in his bath on April 11, 1034, some speculated that Zoe and Michael were responsible. Shockingly, Zoe married Michael, after which — that same day — he became the Emperor Michael IV (1034 to 1041).

Having himself been the beneficiary of Zoe’s loose behavior, Michael IV was inclined to restrict her to the gynaeceum, and he shared his authority with one of his brothers, John, a eunuch. When Michael IV’s health began to fail, John forced Zoe to adopt one of the emperor’s nephews. The young man, known to history as Michael V, was made Caesar, and when Michael IV died on Dec. 10, 1041, the nephew was hailed emperor.

Ungratefully, Michael V soon banished Zoe and John, and established himself as sole emperor. This backfired instantly, however, and the day after her banishment, Zoe was restored, this time as co-empress with her sister, Theodora. Michael V was deposed, blinded, castrated, and sent to a monastery.

After these dramatic events there no longer was an emperor in the Byzantine world, which was now co-ruled by the Empresses Zoe and Theodora. Though Theodora had greatly resisted being crowned, once in place she took her duties seriously and begun to upstage her sister, giving rise to factions within the palace.

Zoe resented having to take her new responsibilities seriously, yet she refused to allow Theodora the prestige she was gaining with her dedicated service. Thus, Zoe sought to resolve the problem by marrying again.

Her first two attempts failed — the first by way of rejection, the second because her candidate died mysteriously just days before the wedding. Her next choice was a noble, charming widower named Constantine who she had known intimately, and who had been exiled for that reason by her second husband, Michael IV.

For both Zoe and Constantine, this would be a third marriage, the maximum allowed by the Orthodox Church. After Constantine was recalled from exile, the two were married, and the Byzantine world had a new emperor, Constantine IX (1042 to 1055). Consequently, Theodora now assumed a subordinate status.

Despite his new marriage, Constantine refused to part with his mistress, Maria Skleraina, and Zoe agreed that Maria could live with them in the palace. This unorthodox circumstance soon became known to all, and an official treaty of friendship was signed. Maria was granted an official title, sebaste, and was allowed to accompany Constantine, Zoe and Theodora at processions and ceremonies.

Even if the imperial family had no objections to this odd arrangement, the public was less forgiving. Rumors began to circulate that Constantine IX and his mistress planned to murder Zoe and Theodora, and in an uprising in 1044, Constantine’s life was spared only because the sister-empresses calmed a mob.

Constantine and his three imperial women were irresponsible stewards, and the fortune that had been amassed by Basil II was soon dissipated. Psellus states that the once-overflowing treasury: “… became the plaything of these women, to be expended on their pleasures. Presents were exchanged or given as rewards one after another. Some of the money was even paid out to strangers, and soon all was spent and exhausted.”

After a long and eventful life of 77 years, Zoe died in the year 1050, being survived by her husband Constantine IX and her sister, Theodora. As Constantine IX neared death in 1055, he tried to pass authority to the doux or leader of Bulgaria, but his efforts were trumped by the resilient Theodora, who defended her rights as a reigning empress.

The family dynasty thus was preserved, however briefly, as Theodora ruled alone for about a year and a half (1055 to 1056) until her health, too, began to fail. Before Theodora died, she passed her power to an elderly patrician, who became the next emperor, Michael VI (1056 to 1057), who ruled for only about one year before he was forced from power in the face of a rebellion.

Though many coins were issued in the names of Zoe’s uncle, father and three husbands (and even a respectable number were issued for Theodora), virtually none were struck for Zoe. Only bronze patterns for yet-unknown gold and silver coins exist for her sole reign in 1041, and only a few gold histamena survive from her two-month joint-reign with Theodora in 1042.