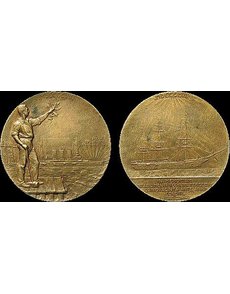 The SMS Archduke Ferdinand Max served the Austro-Hungarian Navy notably at the Battle of Lissa, but it was the trip to the Suez Canal opening that connects it with the medal for the historic event. 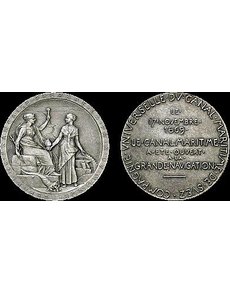 In 1869, France succeeded in opening the Suez Canal, and French artist Louis Oscar Roty was commissioned to design a medal commemorating the occasion.

Threads between numismatic objects can be found, if one looks for them.

What does a silver medal from Egypt celebrating an event in 1869 have to do with a bronze Austrian medal issued in 1907? Examples of both of these medals are being sold in Teutoburger Munzauktion’s sale No. 78 on Sept. 6 and 7, highlighting how easily connections may be made in the hobby.

In 1869, after 10 years of toil, the French enterprise to connect traders and consumers in Europe to Asia was realized with the completion of the Suez Canal. The canal enabled ships to travel between the Mediterranean Sea and the Red Sea without circumnavigating the continent of Africa.

The medal features two seated female figures facing each other, with a legend encircling the design translating to “The French rescue prepares peace in the world” on the obverse. The reverse of the Suez Canal medal bears dates and facts of the canal opening.

The example of the silver medal in the sale was struck about 1900.

It’s easy to connect the dots between this piece and a Austrian medal from 1908 that is being offered in the auction the day after the Suez Canal medal.

The Austrian medal was created by Hans Schaefer, a highly regarded and prolific artist of the time. The subject is the SMS Erzherzog Ferdinand Max, the flagship of the Austro-Hungarian Navy during the reign of Archduke Franz Joseph. The ship’s namesake (Archduke Ferdinand Max) was a brother of Archduke Franz Joseph, and commanded the navy from the age of 22 in 1854 until stepping down to become Emperor of Mexico in 1864.

The ship was launched in 1865, and its most notable action came at the Battle of Lissa in 1866. In 1869 it accompanied Emperor Franz Joseph on his visit to the Holy Land and the opening of the Suez Canal.

And now the story comes full circle, in a sort of hobby version of “Six Degrees of Separation.”

Schaefer created the medal to celebrate the retired ship (and, apparently, the 1907 commissioning of a modern pre-dreadnought battleship of the same name). The medal also apparently marks a 50th anniversary, based on the Roman numeral dates of 1857 and 1907, but the event commemorated is unclear. The auction firm does not elaborate on the secondary meaning, nor does Leonard Forrer in his Biographical Dictionary of Medallists.

A silver medal celebrates the opening of the Suez Canal in 1869.

Louis Oscar Roty designed a medal for the historic event, which is related to a later Austrian medal.