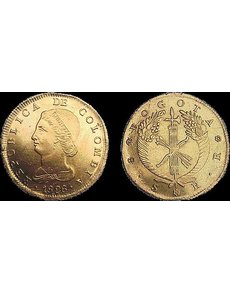 An 1828 Colombian gold 8-escudo coin from Bogota was found this summer in Jamaica. Spanish colonial coins were legal tender on the island until 1901.

A farmer found this Colombian 1828 gold 8-escudo coin in Jamaica this summer while tilling his land on the eastern side of the island.

The farmer plans to sell the coin, but as a scholar (here doing research on a book), I am interested in the history of this coin as it relates to relations between Jamaica (a British colony at the time) and Colombia (a newly independent nation-state) during the early 19th century.

What would a Colombian coin be doing in Jamaica during that time?

What constitutes money was a less rigid concept in the past than it is today. Try to spend a euro coin in Iowa and see how far you get.

But until 1857, foreign coinage was legal tender in the United States. The chief concern when accepting a coin then, in the United States or abroad, was whether it was of sound metal, as evidenced by chopmarks affixed to silver dollars in the Far East or the repurposing of Spanish colonial silver 8-real coins in Australia and Prince Edward Island to make Holey dollars and Dump coins.

That a gold coin of a South American country would be found in the Caribbean is not surprising; Latin American coins circulated with wide acclaim. They were cut and countermarked in various Caribbean islands during coinage shortages, including in Jamaica in the late 1700s.

According to Fred Pridmore in The Coins of the British Commonwealth of Nations, Part 3, Spanish colonial coins were legal tender in Jamaica until April 1, 1901.

This example was struck at the Bogota Mint and is common, according to The Gold Coinage of Gran Colombia by Frank Sedwick (1991). It contains the equivalent of .7614 ounce of pure gold and trades for a slight premium.

I recently found a coin my grandfather gave to me as a child; my parents kept it for me. It is a 1918 Republica De Colombia gold 5-peso piece.

I believe it is real gold, and while it doesn’t appear Mint condition, it is still recognizable. Does it have value other than the sheer gold value?

An About Uncirculated 55 example sold June 4 in an Ira & Larry Goldberg Coins and Collectibles sale for $402.50, including 15 percent buyers’ fee, when the “spot” price of gold gave the coin an intrinsic value of about $330.