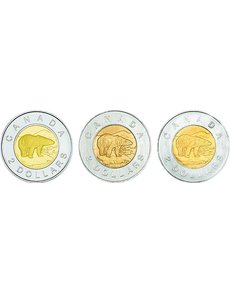 Coins loaned for photography by GatewestCoin.com.

Canadian coins being sold in an annual Uncirculated set might meet the definition of “Uncirculated,” but the standard of quality is quite different from the coins in the 2010 sets.

A Royal Canadian Mint spokesperson has confirmed that the 2011 Uncirculated set coins were struck at the Winnipeg Mint, after such sets were produced (mostly) at the Ottawa Mint in previous years, including in 2010.

The Winnipeg-struck coins are apparently struck to a different quality than those struck at the Ottawa Mint.

Cameron Giesbrecht, with Gatewest Coin Ltd. in Winnipeg, said the difference in quality is obvious. “It looks like they struck circulating coins and stuck them in pliofilm.”

“They don’t seem to have the mirror finish like they usually do,” he said.

RCM Senior Manager of Communications Alex Reeves said moving production to the Winnipeg Mint was necessary to “manage record demand for our bullion products while continuing to meet production commitments for numismatic coins.”

The switch in production facility actually began with a Special Edition Uncirculated set issued late in 2010 and featuring circulating commemorative 25-cent and $1 coins instead of the Caribou and Loon designs, respectively.

“Like the 2011 Set, the 2010 Special Edition Set coins were from Winnipeg and are by definition uncirculated coins,” Reeves said.

A visual inspection of two example sets, a 2010 Uncirculated set and a 2011 set, confirms the change in quality, though it is not noticeable to the same degree on each coin.

Even on those coins that are harder to distinguish between versions, the clarity of design details is often a key identifier.

The differences in the coins’ appearance first came to notice in the hobby in the March 1 to 14 issue of Canadian Coin News, which reported dealer and collector reaction to the quality of coins in the sets. ¦