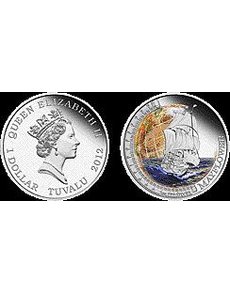 A new noncirculating legal tender coin from Tuvalu celebrates the Mayflower. The Proof .999 fine silver dollar, graphics of which are seen here, is the third coin from the Ships That Changed the World series.

Tuvalu may be thousands of miles from America, but a new collector coin from that far-flung land celebrates an object that was instrumental in American history.

The Perth Mint on Nov. 1 released a Proof .999 fine silver dollar depicting the Mayflower, the cargo ship that transported the English separatists or pilgrims, from a site near the Mayflower Steps in Plymouth, England, to Plymouth, Mass., in 1620.

The coin is the third in a series dubbed Ships That Changed the World.

The Mayflower has an iconic place in American history as a symbol of European colonization. At a time when most countries (including England) had an official state religion, and religious dissent was punished severely (sometimes by death), the Pilgrims journeyed to the New World seeking, above all else, religious freedom. Early settlers were a small party of dissenting Puritans who came to the new world to escape religious oppression and to practice their faith in freedom.

Exact details of the Mayflower’s dimensions are unknown, but estimates based on its load, weight and the typical size of merchant ships of its day suggest an estimated length of 90 to 110 feet and a width of approximately 25 feet, according to the Perth Mint.

The original voyage of the Mayflower included 102 passengers, of which only half were Puritans. Among the others were hired hands, servants or farmers recruited by London merchants for the originally intended destination of the mouth of the Hudson River, and the ships crew numbering 25 to 30 people.

The Mayflower blew off course and never reached the Hudson River. With winter approaching and with few options, the ship anchored in Cape Cod Bay. During the harsh winter, the passengers and crew suffered an outbreak of a contagious disease described as a mixture of scurvy, pneumonia and tuberculosis. By spring, only 53 passengers and half the crew were left alive.

In March 1621, the surviving passengers left the Mayflower and eventually settled at Plymouth. These were the earliest permanent European settlers to New England. It is believed that in November of that year, the Mayflower survivors celebrated a harvest festival to give thanks for their salvation, thus launching the tradition of Thanksgiving in the United States.

The Mayflower, a privately commissioned vessel, returned to England in 1623. It is believed it was eventually dismantled for scrap lumber in Rotherhithe, London.

The reverse of the coin, which was designed by Tom Vaughan, shows the Mayflower in full sail, set against a colored globe map, with the inscription MAYFLOWER.

The obverse depicts the Raphael Maklouf effigy of Queen Elizabeth II, the date 2012 and the denomination.