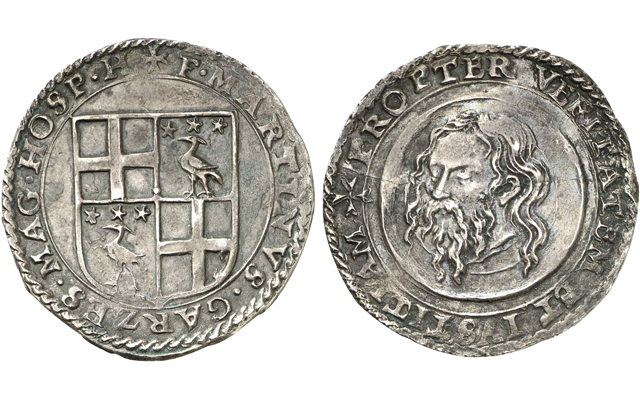 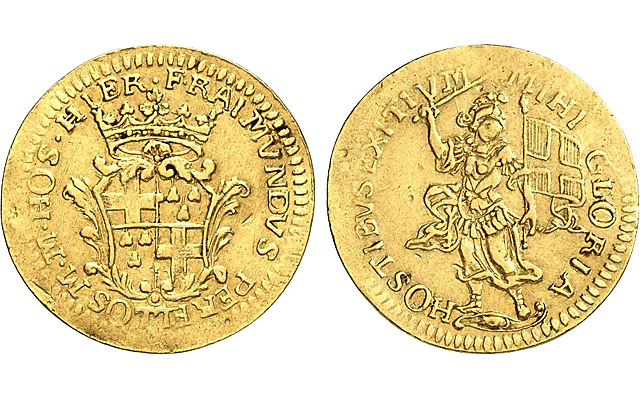 German auction firm Fritz Rudolph Künker recently sold a comprehensive collection of coins and medals of the Sovereign Military Hospitaller Order of St. John of Jerusalem in its auction No. 246 on March 11.

About 160 lots of Maltese coins were offered for sale, and realized hammer prices totaling €300,000 (about $416,364 in U.S. funds), more than double the total estimate, according to the firm. The buyer’s fees vary depending on lot and location of the winning bidder and may range from 15 to 23 percent so are not reflected in the totals here.

The catalog offered a comprehensive historical introduction of the group written (in German) by theologian Michael Autengruber. In addition to a detailed commentary about the pieces, the catalog features images of all crests and portraits of the grand masters whose coins or medals were offered in the sale.

One highlight in the sale was a rare 4-tari piece of Grand Master Martin Garzes, one of two examples of the silver coin known.

Garzes was elected grand master of the Sovereign Military Hospitaller Order of St. John of Jerusalem on May 8, 1595, at the age of 70.

“He accepted a grave inheritance since the Mediterranean Sea had stopped being the center of the world by then,” according to the auction firm.

Italians lost control over the trade of spices and luxury goods after Vasco da Gama discovered the direct seaway from Europe to India. After the conquest of Cyprus, despite the victory of the Christian fleet near Lepanto in 1571, the Mediterranean Sea was firmly in Muslim hands.

The knights based at the island of Malta had, in effect, almost entirely lost their raison d’être. There was no longer fighting in the Mediterranean Sea area, and the grand master prohibited the pirate raids that some Knights of St. John conducted against Muslim trading vessels.

At the same time, the order was stripped of the right to give spiritual counsel to the residents of the island of Malta. These conditions posed large problems for Garzes.

His solution: First, new blood was needed. The grand master reduced the requirements for admission. From then on, a noble descent was no longer compulsory for a knight; it was considered sufficient if one had been born in wedlock and been raised a Catholic given one’s father had already been an officer.

Secondly, the new knights were no longer to be deployed exclusively in the Mediterranean Sea. When the Ottomans invaded Hungary in 1597, the so-called Long War began wherein the Knights of the commandries were able to perform their mandatory military service.

In effecting his solution, "the Grand Master, who was as old as the hills by the standards of the time, ushered in a new era for his Knights Hospitaller,” according to the auction firm.

The grand master reigned until 1601.

However, numismatically speaking, Grand Master Garzes left everything as it was. He had zecchini minted that followed the Venetian model, and issued extremely rare silver coins that are considered today the greatest rarities Maltese coinage has to offer.

The example in the auction shows a coat of arms on its obverse, consisting of the arms of the grand master, a silver swan on blue ground with three golden stars above, and the Maltese white cross on red ground.

The reverse depicts the head of St. John the Baptist lying on a plate. The lettering reads: PROPTER VERITATEM ET IVSTITIAM, translating to “on Account of Truth and Justice.”

The top lot from the Maltese collection was a double zecchino of Ramon Perellos y Roccaful, one of only two examples available on the market. It has the unusual depiction of a standing knight of the order with banner and sword.

The auction house created a video about the Knights Hospitaller of Malta and the coin collection, which may be viewed at www.youtube.com/watch?v=YOuMfQl-JjQ.

The auction was one of four conducted across five days (March 10 to 14) in Osnabrück. Together all four sales (in total containing 6,129 lots) realized a hammer price of an estimated €8.75 million (about $12.1 million dollars U.S.).

Prices realized and catalogs from the firm’s spring auctions may be viewed online at the firm’s website, www.kuenker.de. For more details, telephone the firm at (011) 49 541 96 20 or email it at service@kuenker.de.