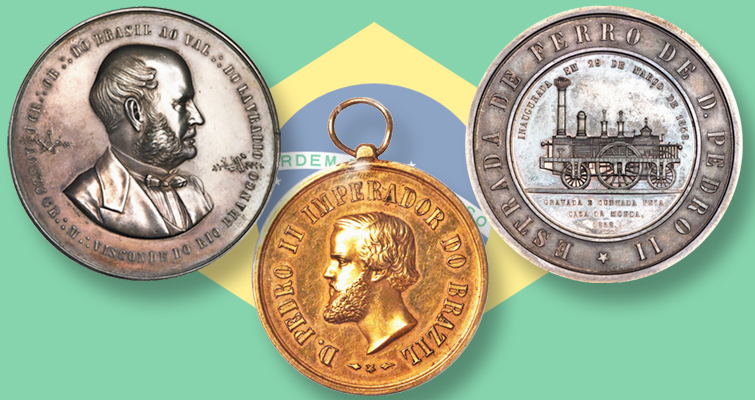 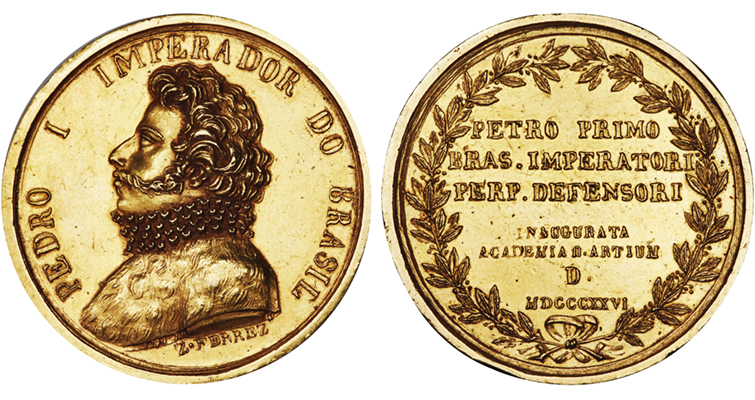 The highlight of a collection of Brazilian medals offered by Heritage Auctions Sept. 8 and 9 is the 1826 Foundation of the Academy of Fine Arts medal, unique in private hands. 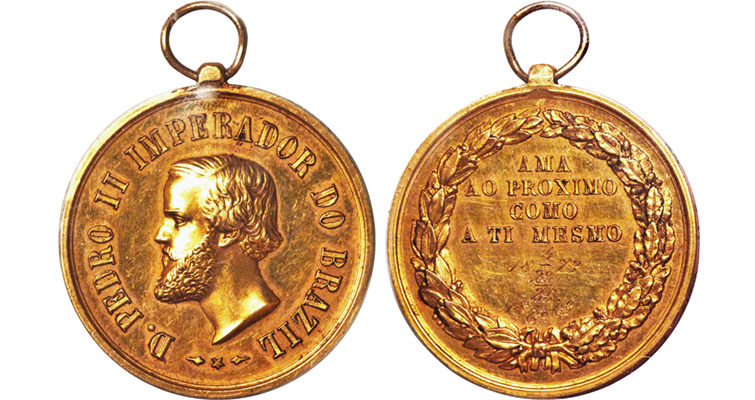 An 1873 gold award medal is one of four or five Award Medals of Pedro II known from various years, but the recipient of this piece is not identified. 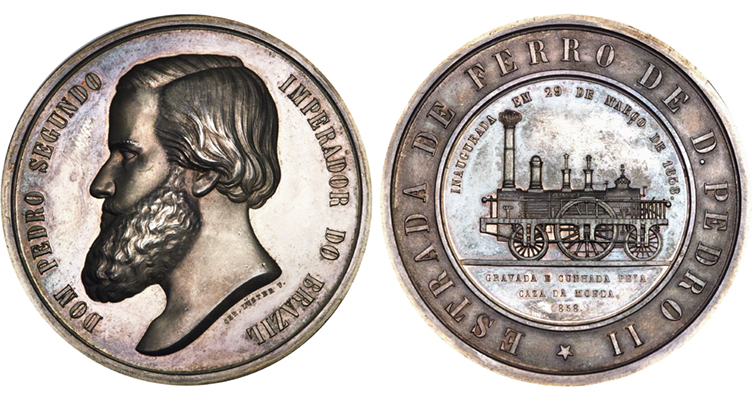 An 1858 silver medal was issued to celebrate the opening of the Estrada de Ferro Central do Brasil, a railway line in Brazil.

The auction house offers a collection of 143 Brazilian Imperial medals and decorations in 107 lots. According to the firm, “It is perhaps the most interesting and advanced group of Brazilian pieces in a couple of decades.”

Several items in the collection are rare to extremely rare, and many are being offered in the United States for the first time.

The collection “draws the rich history of Brazil from its independence in 1822 to the declaration of the republic in 1889,” according to Heritage. “It is an amazing opportunity to obtain incredibly rare pieces from South America’s largest country.”

And one of the rarest pieces in the collection is the main highlight, unique in private hands.

The 1826 gold medal of Pedro I celebrates the Foundation of the Academy of Fine Arts.

The piece was previously not cataloged in gold, Heritage reports.

Designed by Zepherin Ferrez, the 6,400-real medal shows then ruler Pedro I on the obverse, with a seven-line inscription on the reverse inside a wreath.

Ferrez, a member of the French Cultural Mission to Brazil in the early 19th century, engraved several medals and most importantly the “Coronation Piece of Pedro I,” denominated 6,400 reis, in 1822 (an example of which Heritage sold in January 2014 for just shy of $500,000, setting a new record for highest price paid for a Brazilian coin).

The 1826 medal in the Heritage auction is the only available example in private hands, as the two other pieces known are in the National Historical Museum and in the Imperial Museum, both in Rio de Janeiro.

The medal measures 45 millimeters in diameter and weighs 76.46 grams. Heritage describes its condition as Good Extremely Fine and gives it an estimate of $15,000 to $20,000.

Another gold medal in the sale is almost as rare as the 1826 piece but has an estimate at a fraction of the value.

The undated (1873) gold Award Medal of Pedro II has a compelling origin.

Award medals of this type were bestowed to those who showed extraordinary services to humanity.

The Award Medal class was created after the heroics of a free black man of Cabo Verde named Simao, during the wreck of the Brazilian steamship Pernambucana. The ship was overtaken by a wild storm on the night of Oct. 8, 1853, according to Heritage.

Contemporary accounts indicate that Simao saved 13 passengers, swimming back and forth between shore and sinking ship.

Heralded as “the valiant mariner,” Simao was granted an audience with Pedro II, who granted him a purse of 400,000 reis and an award medal depicting the ruler on the obverse and inscriptions on the reverse.

The medal in the auction is of later origin, apparently. The recipient of the medal in the Heritage auction is not clear (it was not Simao), and it dates to 1873, based on the hand-engraved dates on the reverse. The design of the 1873 medal is identical to the earlier piece and this medal would have been worn with a “fire-colored” ribbon (cor de fogo).

Only four or five examples of the award medal are known in gold, issued from the 1850s through the 1880s, before they were rescinded by decree of Dec. 14, 1889.

Many other medals in the sale offer intriguing designs for topical collectors, or are items of historical importance.

Among these highlights is the 1858 Pedro II railway silver medal designed by Christian Luster. The reverse features a train car, while the obverse depicts Pedro II.

The medal is rare in silver; it was issued to mark one of the earliest railroads in the Americas, the Estrada de Ferro Central do Brasil.

Another medal of Pedro II marks the abolition movement.

The 1871 silver Masonic Abolitionist medal is “extremely rare,” according to Heritage.

The Vicecount of Rio Branco, the Grandmaster of the Masonic Lodge of Lauridio, was instrumental to passing laws that would lead to abolishing slavery in Brazil.

He appears on the obverse of the medal, with allegorical imagery showing slaves receiving freedom on the reverse.

For full details of the sale, visit Heritage online. 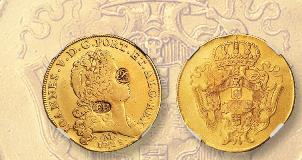