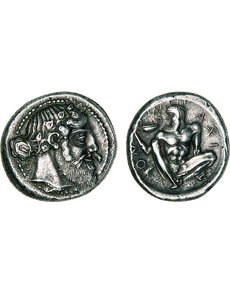 Coin collectors know that coins are often masterpieces of art in their own right, and an ancient coin in an Oct. 24 auction is one of the most revered for its design.

Morton and Eden, the London coin and medal auctioneers, is offering a rare circa 460 B.C. Sicilian silver tetradrachm of Naxos, which features a design considered by some experts (including the auction house) to be “a Greek masterpiece of early classical art.”

The coin is one of the greatest and best-known issues of the fifth century. It was produced as a special issue to commemorate the resettlement or founding of the city of Naxos. (In 461, the city’s original inhabitants returned to the city after their exile in Leontinoi.)

The die-engraver is believed to be the master of the Brussels Aitna tetradrachm, so named for a unique piece found in Brussels that is almost certainly by the same hand.

Dionysus (Dionysos), the Greek god of wine, appears on the obverse and a nude, drunken Silenos (Dionysus’ companion) appears on the reverse, a wine cup poised at his lips.

More than 100 examples of the Naxos coin are known, all from the same die pair (albeit in differing states, as some pieces show faults that intensified as the dies saw more use).

The example offered from Morton and Eden comes from a single, anonymous owner, whose collection of 168 coins covering mainly the archaic and classical periods (sixth to fourth centuries B.C.) was formed over the last 50 years.

The silver tetradrachm of Naxos has an unbroken provenance going back to an auction in Munich in 1907, according to the firm.

Numerous other rarities abound in the collection, including a circa 465 B.C. Sicilian tetradrachm of Syracuse, by the Demareteion Master; a circa 400 B.C. Sicilian silver decadrachm of Syracuse by Kimon with an unusually fine head of the local water nymph Arethusa; a circa 300 B.C. Cretan silver stater of Gortyna, depicting the Rape of Europa, an example which is considered the finer of only two examples known; and a circa 400 B.C. silver tetradrachm of Rhodes with a facing head of Helios the sun god in high relief, which according to the firm is considered to be one of the finest coins of Rhodes in existence.

Another highlight is the circa 480 B.C. silver triple siglos from the island of Kos, showing a diskobolos in the act of hurling the discus. The coin was issued in association with the Triopian Games, which were held by the Dorian pentapolis of Kos, Knidos and the three principle cities of Rhodes in the early fifth century B.C.

All of the lots can be viewed in a PDF version of the catalog posted for free viewing online at the firm’s website, www.mortonandeden.com, or catalogs may be ordered for £15.

The auction is being conducted in association with Sotheby’s, in the Upper Grosvenor Gallery, Aeolian Hall, Bloomfield Place, New Bond Street.