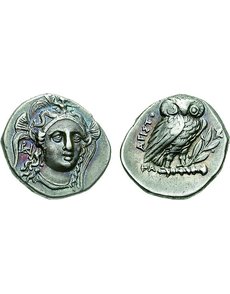 The facing head of Athena, with her triple-crested helmet, is paired with an owl on this drachm of the early third century B.C. from Heraclea in Southern Italy. 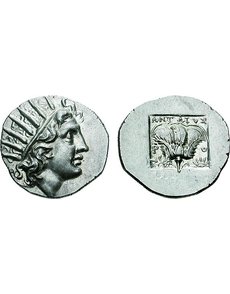 This silver drachm with the head of the god Helios and a rose was struck circa 125 to 88 B.C. on the island of Rhodes, off the coast of modern Turkey. 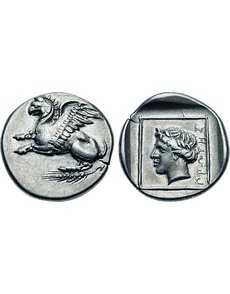 A mythological griffin appears opposite the head of the god Apollo on this tetrobol struck circa 395 to 360 B.C. at Abdera in Northern Greece. 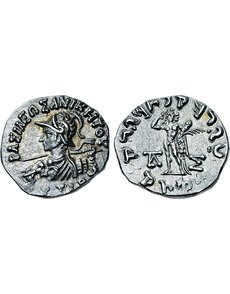 “Greek” coins were struck in some remote areas of the Near East. One example is this portrait drachm of the Indo-Greek King Lysias, who ruled circa 130 to 125 B.C.

Greek silver coins are among the most avidly collected of all ancient coins. To collectors they have universal appeal and were issued in great variety throughout the Mediterranean world. Best of all, many types survive in abundance, making them accessible to collectors at most budget levels.

Greek silver coins were struck in a variety of sizes, ranging from astonishingly small pieces of less than 5 millimeters in diameter to those larger and heavier than a silver dollar. Thus, deciding what kind of Greek silver coins to collect is not easy, and many choose those about the size of a modern dime or 5-cent coin.

The smaller sizes offer some real advantages since they are usually less expensive than larger silver coins (staters, didrachms, tetradrachms), and yet they are more broadly appreciated than small fractional coins, which more often attract the attention of dedicated specialists.

Dozens of different types of dime-size Greek silver coins can be acquired without much difficulty; however, some can be hard to find. One thing is certain: You’ll need the good sense not to pass up an attractive coin at a fair price, for in some cases it may be years before another appealing example becomes available.

Greek silver coins that fall into the dime size category range from about 10 millimeters to 20 millimeters in diameter, with the majority falling into the narrower range of 14 millimeters to 18 millimeters. Weights vary as well, with most coins weighing in at between 1.2 and 6 grams.

Drachms were issued throughout the Greek world at a variety of weights because there were so many different standards. Foremost was the Attic standard of Athens, in which the drachm weighed about 4.30 grams. The Attic standard was widely used in Greece and the Eastern Mediterranean, though it was not so popular in Italy, Sicily and points further west.

In the Western Mediterranean, Greek or Celtic coins of this size were sometimes struck at the weight of the Roman denarius. The best examples are drachms of Spain from the second and first centuries B.C., which often are called denarii. The weights of some smaller Celtic coins were modeled after the Roman silver quinarius, a half-denarius.

Dime-size Greek silver was struck by independent cities, political leagues and kingdoms. A collection of such coins from cities and leagues might appeal to the geographically minded collector, whereas those from kingdoms might be pursued by those who want to acquire at least one example of each ruler.

The issues of cities and leagues were usually intended as local or regional currency. Hoard evidence shows, however, that some drachms of Hellenistic kingdoms could circulate great distances from where they were minted, suggesting involvement in international trade or military payments.

In some cases these coins would have represented a day’s labor, and they certainly would have been used to make mid-level purchases — something far more valuable than a loaf of bread, but well short of something expensive, such as a farm animal.

In general, Greek coins larger than drachms were preferred for trade. There are, however, some notable exceptions. The Parthian and Cappadocian kingdoms in the Near East struck drachms in much greater quantities than any other kind of silver coin. There is no reason to doubt these drachms were used for modest, individual purchases, but it is also clear that they were grouped together for larger transactions.

Curiously, in other kingdoms, such as those based in Pergamum, Bithynia and Egypt, drachms and other small silver coins are actually quite rare. A balance between small and large silver coins was achieved in the Macedonian and Seleucid kingdoms, where both drachms and larger silver coins were issued in significant quantities.

Typically, the designs used for drachms of the Greek kingdoms were similar to those of larger silver coins: a royal portrait on the obverse and a deity on the reverse. In this respect, they are much like the later coins of the Roman Empire.

The best examples are those of the Macedonian King Alexander III “the Great” (reigned 336 to 323 B.C.) who established a network of royal mints throughout Greece, Egypt and the Near East. His standard silver trade coin — the tetradrachm (four drachms) — had exactly the same design as his silver drachms.

Most civic and league coins, however, followed a different model, and their large and small silver coins bore different designs. This may have been due to artistic whim, but more likely it was a practical measure to help people differentiate denominations within systems that otherwise might have been confusing.

Even Athens, a city that established what can only be described as an imperial coinage, had variety. Its silver tetradrachms of the Classical period depict on the obverse the helmeted head of Athena and on the reverse an owl standing right with its head facing. Though this same design appears on Athenian drachms (which were not hard to distinguish from other denominations), the smaller fractions show one or more owls in a variety of configurations, and sometimes the owl is replaced with an object.

We are fortunate that the Greeks made it a priority to distinguish one denomination from another, as it resulted in a great variety of small silver coin types. Collecting such coins is not for everyone, but it would hard to find a more challenging and rewarding pursuit than specializing in dime-size Greek silver coins. ¦