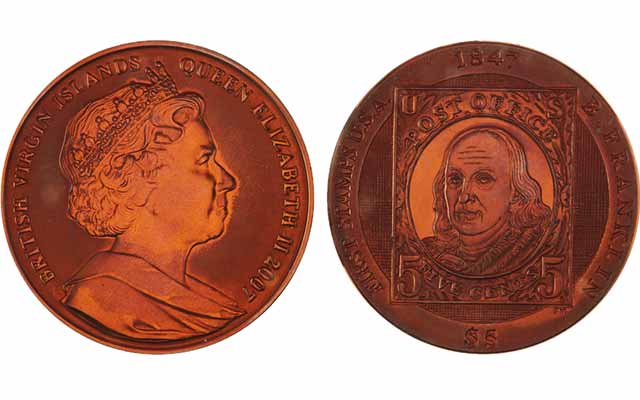 This colored titanium coin from the British Virgin Islands is part of a series honoring famous world stamps. Titanium is so lightweight, this 36-millimeter-diameter coin weighs only 10 grams. 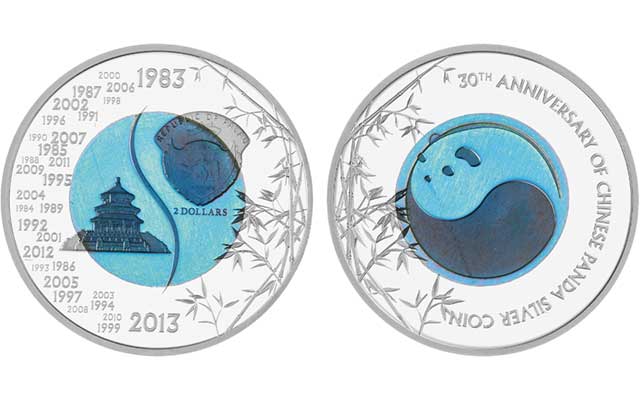 This 2013 Palau $2 coin contains a blue-green niobium core and a .999 fine silver ring, and was minted to celebrate the 30th anniversary of the Chinese Panda silver bullion coin series. 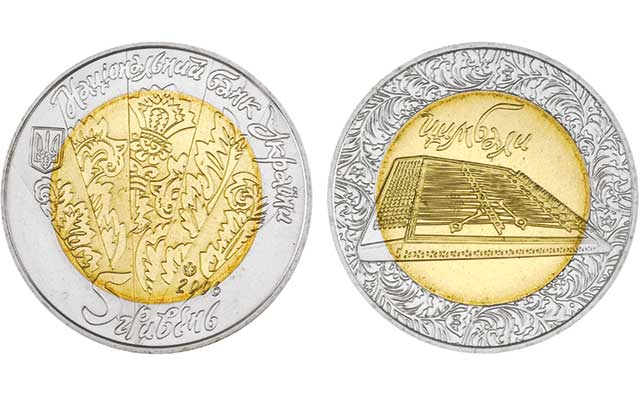 A 2006 Ukrainian ringed-bimetallic 5-hryvnia coin is an example of the use of the outer ring as a decorative frame for the main design element in the center. 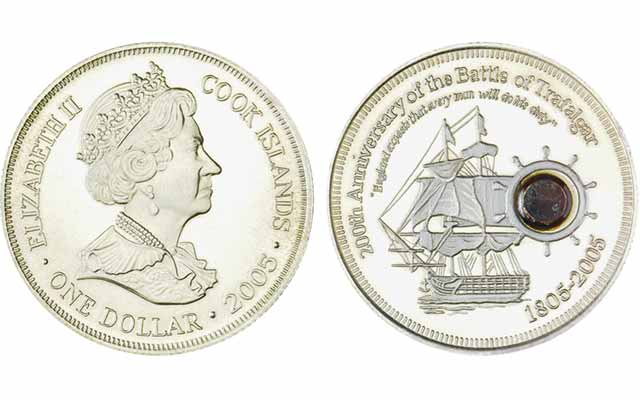 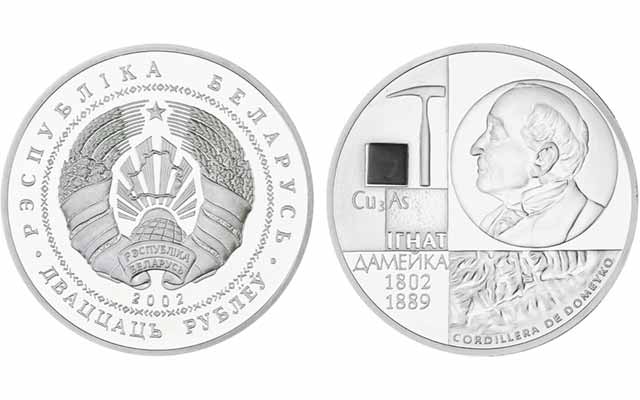 This 2002 sterling silver coin from Belarus commemorates the 200th anniversary of the birth of mineralogist Ignatius Domeyko. It has a piece of domeykite, a mineral named for him, inset or embedded into the reverse. 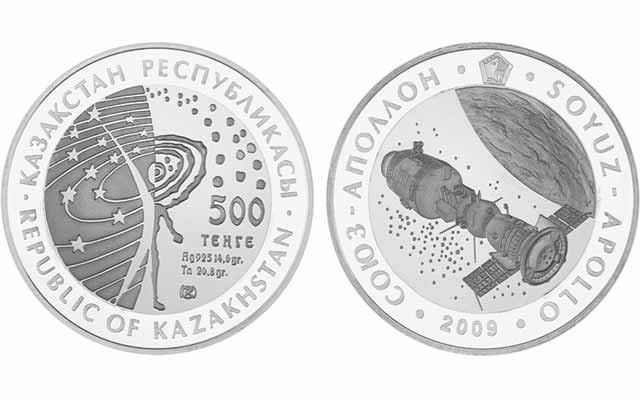 Fourth in a series and titled “Space,” this 2009 Kazakhstan coin has 14.6 grams of sterling silver surrounding 26.81 grams of tantalum. Tantalum is used in the aerospace industry. 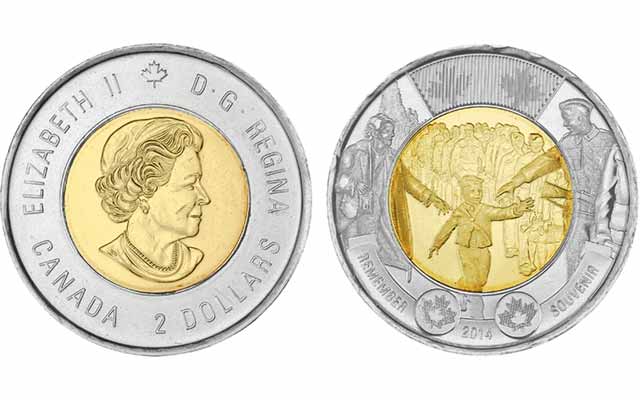 A little boy running after his soldier father who is going off to war calls, “Wait for me, Daddy,” the title of an iconic 1940 Canadian photograph. This is an example of a ringed-bimetallic coin with an outer ring that has a continuation of the design from the center. 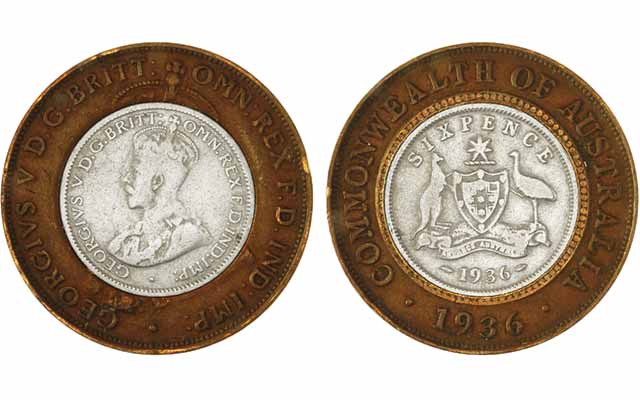 This homemade ringed-bimetallic “7-penny” piece is an altered coin, made from two genuine 1936 Australian coins, a bronze penny and a silver sixpence.

Some legal tender world coins have been made of things like wood and acrylic, but the vast majority are still made of metal.

The creative use of metal is a big part of making modern world coins. Space-age metals, ringed-bimetallic compositions, and mixed and embedded metals are just some of the tools being utilized by mints today.

Tantalum, titanium and niobium are three of the rare metals now showing up in world coins.

From 2006 to 2014, the Kazakhstan Mint issued a series of ringed bimetallic 500-tenge coins with a center of rare tantalum, or tantal, and a ring of sterling silver. The space series honored the first satellite, Vostok, Apollo-Soyuz and the International Space Station, to name a few. For some of the issues, the gray blue tantalum was colored or highlighted with selective gold plating.

Fiji issued a 1-ounce tantalum $10 coin in 2012, but Kazakhstan is the nation most closely associated with the rare metal. That nation is the home of the old Soviet space agency and tantalum is used in the aerospace industry.

Titanium is a corrosion-resistant silver-colored metal that is strong but lightweight. It can also be colored, which makes it ideal for coinage.

The British Virgin Islands 2007 titanium $5 coin celebrates the 160th anniversary of the first U.S. stamp, which features Ben Franklin. This coin, which measures 36 millimeters in diameter, weighs only 10 grams, not the 20 to 25 grams of a copper-nickel coin with comparable diameter.

The Isle of Man, Gibraltar, Austria, and Luxembourg are some of the nations that have also issued titanium coins.

Niobium is similar to tantalum in many ways. It is gray in color but can be colored with anodizing, is a super conductor, and has many industrial applications. It is often used to make steel stronger.

In 2013, Palau issued a 15-gram ringed-bimetallic $2 coin with a blue-green niobium core and a silver ring.

This coin celebrates the 30th anniversary of the Chinese Panda silver bullion coin. Austria, Canada and Mongolia are a few more nations that have issued niobium coins.

Embedding coins with metal relics is another trend in world coinage.

One example comes from Belarus, a 2002 sterling silver 20-ruble coin that commemorates the 200th anniversary of the birth of native son and mineralogist Ignatius Domeyko (1802 to 1899). The relic inset in the design is a piece of the metal named for him: domeykite, a grayish, copper arsenide metallic mineral.

A 2005 Cook Islands copper-nickel dollar inserts a metal relic of historic significance in a commemorative.

Commemorating the 200th anniversary of the Battle of Trafalgar, it has a nail head that came from a ship in Adm. Lord Nelson’s fleet. To keep shipworms out of the wood, the bottom of his ships were covered in sheets of copper affixed with copper nails. A quote above the inset copper is from Nelson: “England expects that every man will do his duty.”

The first circulating ringed-bimetallic coin was the 1982 Italian 500-lira piece.

Dozens of nations have joined the ringed-bimetallic club since then; the coins are popular for their color-contrasting looks and because they discourage counterfeiting.

The ringed-bimetallic concept has evolved into two types, those with mainly separated designs on the center and on the ring, and those with a melded design.

A 2006 Ukrainian 5-hryvnia commemorative coin is an example of the first type. The copper-nickel outer ring with a baroque pattern is used as a decorative frame for the main design element in the Nordic gold (the gold-free, primarily copper alloy) center.

The center displays a tsymbaly, a stringed instrument that is played by striking it with two small hammers or sticks. The instrument is popular in folk music.

The central design flows between the different color metals of the ring and core without a break.

This design derives from an iconic 1940 photograph, a source of great pride and patriotism in Canada: A little boy runs after his soldier father who is going off to war, calling, “Wait for me, Daddy.”

The final ringed-bimetallic example is an Australian 1936 7-penny coin. If you’ve never heard of this denomination, there’s a good reason.

It only exists as a hybrid, an altered coin made in the trench art tradition by combining a genuine silver sixpence center with an outer penny bronze ring. The artist who makes these hybrid coins also creates marbles and whistles from pre-decimal Australian coinage.

Want to know about more coins in unusual metals? Coin World has you covered!