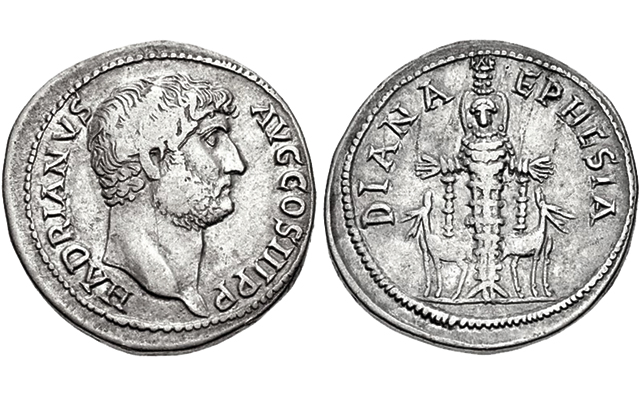 Ephesus was the center of cult worship of the goddess Artemis in ancient times, and the city featured her prominently on its coins. Those from Ephesus show the statue and a reference to her name on the reverse. A Very Fine silver cistophorus of Hadrian, circa A.D. 128 to A.D. 138, realized a hammer price of $1,400. 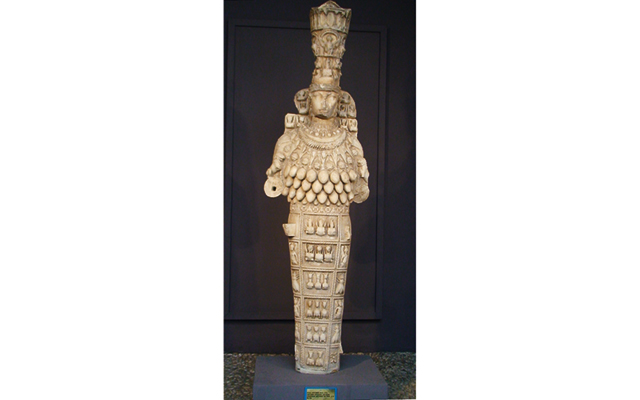 A first century A.D. Roman copy of the cult statue of Artemis of Ephesus found at the Temple of Ephesus is in the Museum of Efes in Turkey. 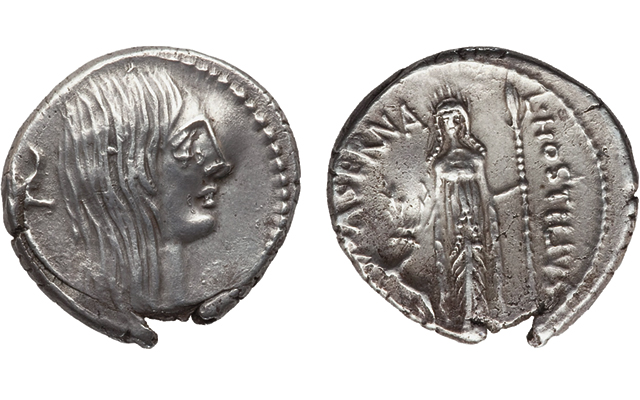 Artemis was used as a design element for coins of many cities beyond Ephesus, issued by many rulers and in many denomination and metal combinations. This silver denarius of Gallia, issued by the moneyer L. Hostilius Saserna, realized $499.38, with buyer’s fee, during Heritage Auctions’ April 10, 2014, auction.

The final of the seven ancient wonders to be honored for certain on coins is the Temple of Artemis in Ephesus.

The goddess Artemis (known as Diana to Romans) was depicted as Apollo’s twin, and a cult surrounding her arose in ancient times, with Ephesus in modern-day Turkey the center of worship.

A temple was built (and rebuilt twice) on a site near Ephesus to glorify Artemis, the first dating to the Bronze Age.

The second temple was sponsored at least in part by Lydia’s King Croesus, who ruled over Ephesus. Construction began around 550 B.C., and when complete the marble structure was reportedly 115 meters (377 feet) long and 46 meters (151 feet) wide. Ionic columns rose 13 meters (40 feet) high.

Not long after it was completed, a man seeking fame, Herostratus, destroyed the temple in an act of arson. Tradition suggests that the fire coincided with the birth of Alexander the Great.

The temple site was rediscovered in 1869 by an expedition sponsored by the British Museum, and today a single column constructed from disparate pieces marks the site of the famed monument to the goddess and her cult.

Because Artemis was such an important figure to Ephesus, she is readily seen on the coins of the city.

According to Classical Numismatic Group, three depictions of Artemis/Diana predominate on coinage: Artemis the Huntress, Artemis Ephesia, and Diana Lucifera.

The Artemis Ephesia design, representing a cult statue found in Ephesus, is the most appropriate image to consider for the “Seven Ancient Wonders” collection.

Artemis Ephesia appears in varying reverse designs, by herself or with other gods or goddesses or even rulers. These coins include those issued under the authority of various Roman moneyers (officials overseeing coinage production) and for different emperors. She is seen on bronze and silver coins, and across several different denominations, and from many places beyond Ephesus.

Representative examples are readily available, but those struck at Ephesus itself would be the most desirable for this collection. These bear the legend diana ephesia on the reverse, an explicit link to the cult goddess.

A silver cistophorus of Hadrian (issued after A.D. 128 to A.D. 138) was sold in CNG’s sale No. 90 on May 23, 2012, realizing a hammer price of $1,400. That example graded VF and was a little toned. Another cistophorus, issued circa A.D. 50 to 51, with a dual portrait of Claudius and Agrippine Junior, and like the Hadrian example graded VF toned, realized $1,800 in the same auction. (Buyer’s fees were either 18 percent or 15 percent, depending on bidding method.)

If quality is less of a concern, consider a bronze coin (referred to as AE 37 by collectors) issued by Lucius Verus circa A.D. 161 to 169. The statue of Artemis appears between Verus and Marcus Aurelius on the reverse. A Good Fine example with a dark patina realized $282, including 17.5 percent buyer’s fee, in a Sept. 10, 2012, Heritage Auctions’ sale.

Comparatively, pieces that were struck outside of Ephesus are more affordable in higher grades — to wit, a circa 48 B.C. silver denarius of Hostilius Saserna, graded Choice About Uncirculated by Numismatic Guaranty Corp., realized $499.38, including the 17.5 buyer’s fee, in Heritage Auctions’ Apr. 10, 2014, sale. That coin was struck in Rome and features Gallia on the obverse, with Artemis of Ephesus depicted on the reverse.