Coins of the Bar Kokhba War 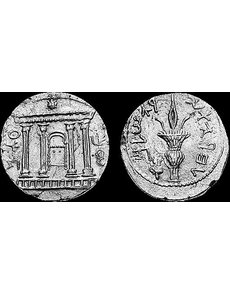 The Ark of the Covenant appears in the Temple of Jerusalem on this sela of the third year (A.D. 134 to 135) of the Bar Kokhba War. The reverse shows a lulav and an etrog. 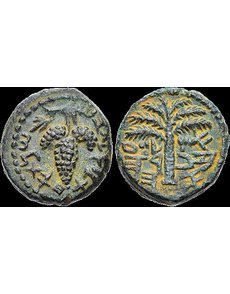 This “small bronze” piece shows a grape cluster and a palm tree. It is inscribed “Year One of the Redemption of Israel” and names the enigmatic figure “Eleazar the Priest.” 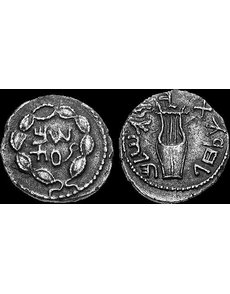 This silver zuz of the third year of the war (A.D. 134 to 135) shows a wreath and a lyre. The Hebrew inscription on its reverse means “for the Freedom of Jerusalem.”

Judaea was one of the most troubled regions of the Roman Empire, and was the site of two great wars in which Jews tried to oust their Roman overlords.

Though both wars were costly and humiliating to the Romans, they were far more harmful to Judaea and its people. The coinage of the Bar Kokhba War is extraordinary in many ways and continues to captivate collectors with its variety of denominations and types.

Curiously enough, the war occurred during the most stable and prosperous era in Roman history, the Pax Romana, highlighted by the reign of the Emperor Hadrian (A.D. 117 to 138), who otherwise behaved rather beneficently toward his subjects in the provinces.

Few can deny that Hadrian judged poorly when he “refounded” Jerusalem as Aelia Capitolina, a Roman colony bearing his own family name, and when he announced his intention to erect a temple for Jupiter on the site of the holy Jewish Temple that had been leveled by the armies of Titus during the First Revolt. The Temple ground was held sacred, and the emperor’s plans to honor the chief god of the Romans helped to spark a Jewish revolt.

Military aspects of the revolt were led by Simon Bar Kosiba (Bar Kokhba), who is named “Simon, Prince of Israel” on some revolt coins. The spiritual leader was Rabbi Akiba, who is not named on coins. The role of another important man, named “Eleazar the Priest” on some coins, is not certainly known.

The first attacks by rebels in the fall of A.D. 132 caught the Romans off guard, forcing the Roman governor Tinius Rufus to evacuate Jerusalem and to take with him the 10th Legion. Thus began what the rebels described on their coins as “Year One of the Redemption of Israel.”

Soldiers from around the empire converged on Judaea during a three-year period to fight the rebels, with thousands of Roman troops dying as a result. However, perhaps a million Jews perished, and the Holy Land suffered great destruction, with more than 1,000 villages and outposts said to have been destroyed.

The rebels issued no gold coins, but produced an abundance of silver and base metal coins by withdrawing Roman coins from circulation and overstriking them with dies of their own creation. The surfaces of the Roman coins were hammered or filed to remove as much of the original design as possible, yet elements of the host coin’s designs usually survived these processes.

Researchers have determined that the host coins were not heated when they were overstruck, and that hinged dies were used, as the die axes are always vertical, usually aligned at 12 o’clock, but sometimes at 6 o’clock. Also, it is clear that some kind of collar was used in the minting of the silver coins, a technique previously not observed for the striking of ancient coins.

We are fortunate that the rebels’ coins bear inscriptions that range from the informative to the patriotic. Though the language is Hebrew, the letters are Palaeo-Hebrew, a script which had been out of general use for more than 500 years, perhaps chosen because of its archaic nature.

Some of the informative inscriptions record the year of issue. Those of the first year are inscribed “Year One of the Redemption of Israel” and those of the second have the legend “Year Two of the Freedom of Israel.” Most issues do not bear dates, and thus are assigned to the third and final year of the war.

Though the quantity of first-year issues was modest, volume increased significantly in the second-year, and the undated issues of year three were produced in large enough quantities that they are readily available to collectors today.

Additionally, “irregular” or “barbarous” coins are known. They presumably were struck at branch mints or under stressful conditions in army camps or besieged cities, as die links are known between the irregular and the regular issues.

Bar Kokhba coinage includes six distinct coin types, two in silver and four in bronze. The large “silver” denomination, called a sela, was overstruck on tetradrachms issued by the Romans in Eastern provinces. Strictly speaking, the sela is a billon coin since its host coins were struck in debased silver.

The designs of the sela did not change during its three years of issuance. Its obverse showed the Temple of Jerusalem containing the Ark of the Covenant, and its reverse shows ceremonial object(s): a lulav (a bound bundle of twigs and foliage), usually flanked by an etrog (a citrus fruit).

The small silver denomination, called a zuz, was overstruck on Roman denarii and provincial drachms of good silver. (A double-weight zuz is known by only one example, and must have been experimental.)

The zuz was produced with a pair of dies bearing combinations of two obverse and four reverse designs. The obverse bore a cluster of grapes or a wreath enclosing an inscription. The reverse features either a palm branch; a one-handled jug (usually flanked by a small palm branch); a pair of trumpets; or a lyre, a string musical instrument in the form of a chelys (stout, rounded body) or a cithara (tall, rectangular body).

Bar Kokhba coins are well documented in a die study by the late Leo Mildenberg, The Coinage of the Bar Kokhba War. This meticulous work illustrates an impression of every known die and records every die link that was known to Mildenberg at the time of publication in 1984. David Hendin’s Guide to Biblical Coins, now in its fifth edition, offers an accessible review of the Bar Kokhba coinage, and the book remains in print. ¦