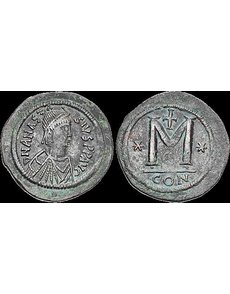 The most impressive coin of Anastasius’ coinage reform was the copper follis, valued at 40 nummi. This example was struck at Constantinople circa A.D. 512 to 518.Images courtesy of www.cngcoins.com. 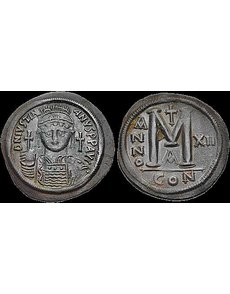 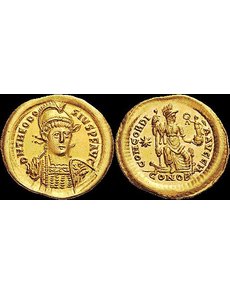 This gold solidus of the Roman emperor Theodosius II (A.D. 402 to 450) is virtually identical to solidi struck by the Byzantine Emperor Anastasius almost a century later. Images courtesy of www.nomos.com. 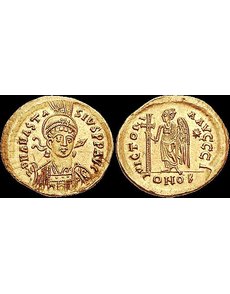 The Byzantine emperor Anastasius (A.D. 491 to 518) is shown facing in military attire on this gold solidus struck at the Constantinople Mint between circa A.D. 492 and 507.Images courtesy of www.cngcoins.com.

In the late fifth century A.D., the Roman world was in transition.

The European territories that were still in Roman hands — including Italy — were impoverished and on the verge of collapse, whereas the eastern territories were faring comparatively well and could resist their enemies.

The inevitable happened in A.D. 476, when the Roman government based in Italy was overthrown by German soldiers led by Flavius Odovacar. The emperor of the time, Romulus Augustus, was himself a puppet ruler, hailed emperor by his father, Orestes, who was then the highest-ranking soldier in the West. Though Roman culture remained in the West, Roman rule ceased.

With the Roman world now reduced to territories in the East, most would agree that by A.D. 476 the era known as “Byzantine” had begun. Some historians place the transition earlier, as far back as the late third century A.D., or at various points in the fourth century. We should note that the term “Byzantine” only came into regular use in the 18th century, and that the Byzantines referred to themselves as Romaioi — Romans.

The numismatic transition from the Roman to the Byzantine empires is relatively clear, even if it does not coincide with the fall of the West in A.D. 476. The reason for the inconsistency is that the system for gold coinage remained intact, yet base metal coinage was reformed radically in about A.D. 498 by the Byzantine emperor Anastasius (A.D. 491 to 518).

Since the reform of base metal coinage took place only a short period of time after the fall of the West, that event is the assured starting point for Byzantine coinage. Understandably, though, even the pre-reform coins of Anastasius are categorized as Byzantine since his entire reign is considered to be part of the new era.

In Late Roman times, gold coinage was issued consistently at a network of mints throughout the empire. The chief denomination was the solidus, a coin with a target weight of about 4.4 to 4.5 grams, struck at 72 to the Roman pound. It was renowned for the consistency of its weight and purity, and was the standard trade coin of the Roman and Byzantine world for centuries.

Except for ceremonial issues, the other gold coins of the era were the semissis (half-solidus) and tremissis (third-solidus), both of which were struck in reasonable quantities. The tremissis was especially popular in the West, and after the fall of Roman rule it soon became the gold coin of choice in Western Europe.

Gold coins were unchanged in the transition from Rome to Byzantium. Their weights and purities remained consistent, and even the basic designs were the same as those used by the previous emperors in the East, Leo I (A.D. 457 to 474) and Zeno (A.D. 474 to 475 and 476 to 491).

In earlier times the Romans had a relatively balanced system in which an abundant silver coinage filled the gap between the valuable gold coinage and the “token” issues of copper, bronze or brass. Over time, silver was struck less frequently, and by the later fifth century it was no longer a significant part of the coinage system.

This meant a great disparity in value existed between gold and base metal coins, especially since the copper pieces had degenerated greatly in size. The base metal coin of the era, a nummus, was only about 7 to 12 millimeters in diameter and typically weighed 0.5 gram to 1.5 grams. They were very common, and were held in low regard. The value of the little coppers varied depending on location and economic conditions, but normally one gold solidus was equal to about 7,000 to 16,000 nummi.

To Anastasius and John the Paphlagonian, who was Anastasius’ count of the sacred largess (the equivalent of a public treasurer), the situation was untenable: virtually no coins existed to fill the chasm between the lowly nummus and the gold coinage. Silver was then too scarce for large-scale coin production, so more valuable copper denominations were introduced.

The largest of these new coppers, known as a follis, was valued at 40 nummi. Though it still required 420 of these coins to equal a gold solidus, it was a great advancement in closing the monetary gap, especially since 140 of them were the equivalent of a gold tremissis.

The earliest of the folles were struck on relatively compact planchets about 22 millimeters in diameter, gradually increasing to planchets as large as 27 millimeters.

Starting in about A.D. 512 the planchet size was increased to about 30 to 35 millimeters, with some examples being as large as about 38 millimeters.

This flagship denomination was supplemented with three others: a 20-nummus (half-follis), 10-nummus (quarter-follis) and 5-nummus (eighth-follis). It was easy to distinguish these new coppers by their relative size, and also by their designs, making it a highly functional coinage.

The reverse of the 40-nummus bore a large M, which was the equivalent of 40 in the Greek numbering system. Likewise, the 20-nummus bore a large K, the 10-nummus an I and the 5-nummus an E. It may be surprising that in an empire of self-proclaimed Romans a Greek numbering system was used for coin denominations, but the East was still culturally Greek, and Greek was still commonly spoken.

Anastasius’ coinage reform was effective, for it was continued by his immediate successors, Justin I (518 to 527), Justinian I (527 to 565), Justin II (565 to 578), and others beyond, each of whom adjusted the formula slightly to suit his needs.

The follis achieved its greatest size in the 12th year of Justinian I (A.D. 538 to 539), when his own monetary reform caused an increase in the weight and size of the follis, which in that year normally ranged from 40 to 45 millimeters in diameter and weighed between 20 and 24 grams.

The appearance of the follis also changed, with the imperial portrait evolving from a profile view to a full-facing bust in military attire, and the inclusion of a date, reckoned according to the emperor’s regnal year. The increased size of the follis, however, was too ambitious, and by Justinian’s 16th year the increase had been reversed. ■