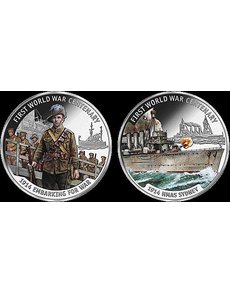 Downies remembers the coming centennial of World War I with two $10 coins from the Solomon Islands, showing Australians “embarking for war” and noting the HMAS Sydney’s victory over the SMS Emden. 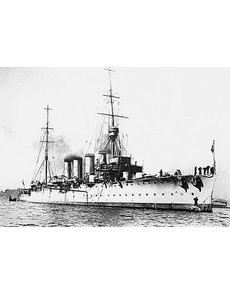 The HMAS Sydney’s most famous engagement was the victory over Germany’s SMS Emden, which suffered 199 casualties and was forced to run aground.

Image courtesy of the John Oxley Library, State Library of Queensland, and Wikipedia.com.

A pair of commemorative $10 coins from the Solomon Islands will mark the centennial of World War I.

Australian coin firm Downies is issuing both Proof .925 fine silver coins on Oct. 15. In addition to noting the war’s centennial, one coin also remembers one of the war’s most famous naval engagements in Australian history, the sinking of the SMS Emden by HMAS Sydney during the Battle of Cocos.

The Emden was a German cruiser that formed part of the German East Asiatic Squadron early in World War I. It stalked Indian Ocean shipping routes and became the scourge of Allied naval ships, sinking merchant vessels and bombarding Madras (Chennai, India, then under British control).

On Nov. 9, 1914, the superior Sydney surprised the Emden while it was attacking the British radio station on the Cocos (Keeling) Islands. The Australian light cruiser heavily damaged the German warship, forcing the Emden’s captain to run his ship aground.

The reverse of one of the coins highlights the famous battle. The reverse of the other coin shows Australian soldiers and sailors as they are “embarking for war,” the machinery of war in the background.

Some 422,000 Australians fought during the war, with more than 60,000 giving their lives in the war effort, which came in support of British efforts against Germany.

The Australian War Memorial in Canberra was built to honor those who fought in the war.

The obverse of each 2014 coin features the Ian Rank-Broadley effigy of Queen Elizabeth II.

Both coins highlight their respective themes in color; they weigh 25 grams and measure 40 millimeters diameter. Both coins are limited to mintages of 5,000 pieces.

Each coin is available for an individual price of $95, with shipping and handling an additional charge.

To order, telephone Downies toll free at 877-897-7696, email it at downiesusa@downies.com or visit www.downies.com. ¦