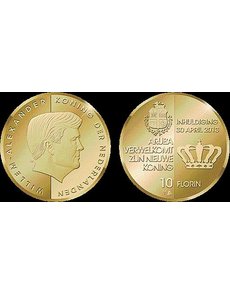 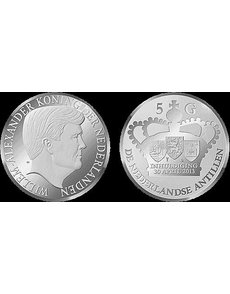 Curaçao and St. Maarten, part of what was once the Netherlands Antilles, celebrate Crown Prince Willem-Alexander’s April 30 investiture as king with two coins, including a Proof .925 fine silver 5-gulden coin.

The celebration of a new Dutch ruler has spread across the ocean.

Willem-Alexander is the Netherlands’ first king in more than a century, replacing his mother, Queen Beatrix, on April 30 following her abdication.

The Dutch Caribbean constituents of Aruba and Curaçao and St. Maarten have now issued commemorative silver and gold coins marking the event, following earlier release of commemorative coins from the Netherlands honoring the transition (Coin World, May 13 issue). All of the entities will issue new circulating coins with Willem-Alexander’s effigy. Aruba’s coins are slated for release sometime this summer and the coins of Curaçao and St. Maarten will follow, probably next year, according to representatives from the central banks that will issue the coins.

The seating of a new monarch in the Netherlands is neither a coronation nor an inauguration, but is instead referred to as an investiture.

The Dutch Caribbean states, which are autonomous countries but are still part of the Dutch kingdom, chose traditional designs showing the new king’s head on the obverse, with values, crowns and coats of arms on the reverse. The designs differ from nation to nation but the elements used on each coin are of same broad kind.

The jointly issued coins from Curaçao and St. Maarten, parts of the former Netherlands Antilles that now share a central bank, are 5- and 10-gulden pieces. The coins bear the issuing nation’s name as Netherlands Antilles, though that entity was dissolved in 2010 following Aruba’s independence in 1986.

Each order from the distributor should include $5.75 for shipping and handling, and Vermont residents must add six percent sales tax.