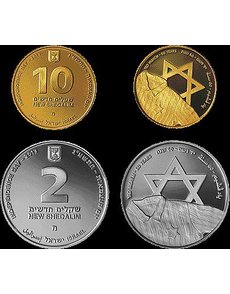 Israel’s latest collector coin program, including a Proof silver 2-new-Israeli-sheqel coin and a Proof gold 10-NIS coin, honor the Yad Vashem, where records of Holocaust victims are gathered for posterity.

Museums are usually warehouses of historical objects. Israel’s Yad Vashem, in Jerusalem, on the other hand, holds memories and names.

New coins from the Bank of Israel commemorate the museum’s role as a repository for records of Holocaust victims. In 60 years, 2.6 million names of victims have been documented by Yad Vashem through its “Pages of Testimony” effort, increasing the list to 4.2 million known names from the estimated 6 million Jewish victims of the Holocaust.

Yad Vashem is the Jewish people’s living memorial to the Holocaust, visited by nearly a million people annually, including world leaders, dignitaries and others.

Three new coins highlight the museum’s role in telling the story of those who might otherwise have been forgotten.

The reverse design depicts a simple striped shirt with the yellow Star of David that the Nazis forced Jews to wear. Dominating a blank field behind the shirt is a bolder and larger Star of David rising in the background that is a statement of “Am Yisroel Chai” (the people of Israel live).

The obverse carries the Israel state emblem, “Israel” in English, Hebrew and Arabic, the year date, Mint mark and denomination.

The coins, according to Aviv Katz, CEO of Israel Coins and Medals Corp., or Israel Mint, are “a poignant reminder of the past horrors of the Holocaust, while at the same time, a firm expression of the continuity and rebirth of the Jewish people in the modern State of Israel.”

The Prooflike coin weighs 14.4 grams, measures 30 millimeters in diameter and has a mintage limit of 1,800 coins.

The Proof silver coin weighs 28.8 grams, measures 38.7 millimeters in diameter and has a mintage restricted to 2,800 coins.

The gold coin weighs 16.96 grams, measures 30 millimeters in diameter and has a limited mintage of 555 pieces.

The three coins are available individually and in a set of all three coins. Another set is available containing just the two silver coins.

Part of the proceeds from the coin sales is being donated by ICMC to Yad Vashem, according to the ICMC.

To order or for more information, visit www.israelmint.com, call toll free in the United States at 888-421-1866 or email ICMC at medals@coins.co.il. ¦