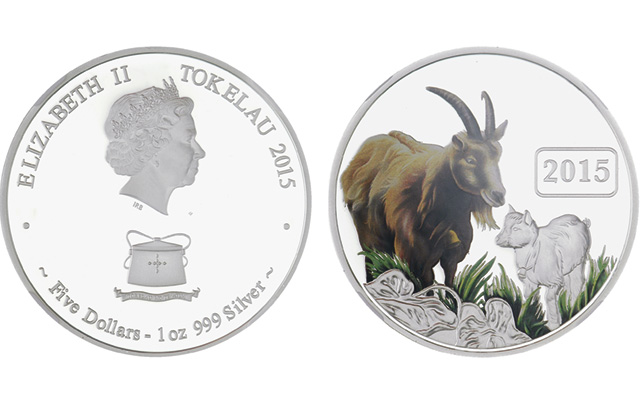 Tokelau’s annual issue of commemorative coins like this Proof .999 fine silver $5 Year of the Goat from 2015 have helped the tiny nation earn tens of thousands of dollars in revenue annually.

Contracts to strike coinage for tiny islands can be very lucrative for those far-flung outposts.

According to an April 2 news release from the government of Tokelau, sales of coins and stamps have helped the island generate more than $70,000 in New Zealand dollars (or $53,202 U.S.) in the current fiscal year.

That figure is slightly more than expected, according to Lise Suveinakama, coordinator of the programs.

Tokelau’s current commemorative coins and stamps program was launched “five or six years ago,” according to the government, and sales each year continue to rise.

“The programmes are in slow progress but are improving especially for the coins. It is receiving more than it did many, many years ago,” Lise said.

An Australian company, Treasures of Oz Pty Ltd., manages the commemorative coins, which are often sold through exclusive distributors like Modern Coin Mart in the United States. Coin Invest Trust has also issued coins for Tokelau in recent years.

The Tokelau Stamps Program is being managed by New Zealand Post. Both programs operate under management agreements with the Government of Tokelau.

All commemorative legal coin designs approved are with consent of Queen Elizabeth II.

For those collectors who encounter non-circulating legal tender coins from Tokelau and wonder where it is located, Tokelau is a territory of New Zealand in the South Pacific Ocean.

The territory consists of three tropical coral atolls with a combined land area of 12 square kilometers that support a population of approximately 1,300 people, according to the World Factbook.

Among recent coin issues for Tokelau is the Tokelau Year of the Goat commemorative coin. The Proof 1-ounce pure silver $5 coin shows a mother and kid on the reverse, with the Ian Rank-Broadley effigy of Queen Elizabeth II and the nation’s coat of arms on the obverse.

Want to know more about coins of Tokelau and other island nations?