Coinage of the Greek leagues 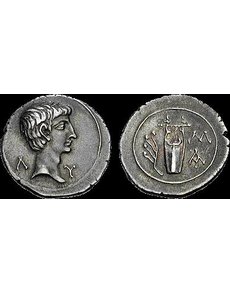 Coins were struck for the Lycian League centuries after the Romans first ruled in Asia Minor. This silver drachm was struck early in the reign of Rome’s first emperor Augustus (27 B.C. to A.D. 14). 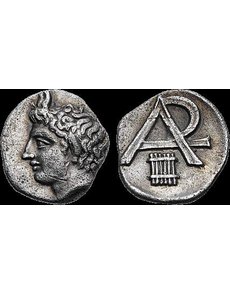 The Arcadian League issued a variety of coins, including this silver obol, which depicts the horned head of the god Pan and his syrinx-flute beneath the league monogram. 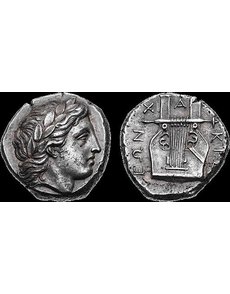 This silver tetradrachm of the Chalcidian League was struck in the mid-fourth century B.C. It bears a fine-style portrait of the god Apollo and his musical instrument, the lyre. 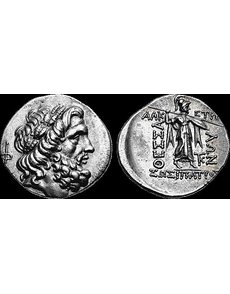 A portrait of the god Zeus and the standing figure of the goddess Athena are shown on this silver stater of the Thessalian League, struck sometime between the late second and mid-first centuries B.C.

Most ancient Greek coins were struck for independent city-states or for empires. However, another important category exists: league coinages.

The Greeks sometimes formed leagues for the benefit of their member-cities.

Not every Greek league issued coinage — at least not in name. One example is the Delian League, through which its leading city, Athens, amassed great power and wealth in the fifth century B.C. In this case, the millions of Owl silver tetradrachms that bore the name and types of Athens were the de facto coinage of the league.

Some other alliance coinages were less enduring. In about 404 or 394 B.C., eight Greek colonies, mainly on the western coast of Asia Minor, are known to have struck coins with a common reverse showing the infant Heracles wrestling two snakes that had been sent by the goddess Hera to kill him in his cradle. The design is accompanied by the inscription SYN, abbreviating “synmachikon,” suggesting “a coin of the allies.” The obverse types of these coins all are different, each bearing the recognizable emblems of the issuing cities.

In this column we’ll introduce the Chalcidian, Thessalian, Aetolian, Euboean, Achaean, Arcadian and Lycian Leagues and their coins. Though each of these league coinages is substantial enough for a book of its own, we’ll merely provide a general overview of this interesting subject.

One of the most successful Greek leagues was based in the Chalcidice, a peninsula on the southern shore of Macedonia. It was active for nearly a century (432 to 348 B.C.), trying to defend its member-cities from the imperial interests of Athens and Macedonia, whose King Philip II (359 to 336 B.C.) eventually conquered its capital city, Olynthus, in 348 B.C., and dissolved the league.

Its coinage principally consists of silver tetradrachms and tetrobols, small bronzes, as well as gold staters that today are extremely rare. The principal designs are consistent, showing on the obverse the head of the god Apollo, and on the reverse his preferred musical instrument, the lyre.

A similar confederation existed in Thessaly, a region in east-central Greece. The earliest issues of Thessalian League date to the 470s B.C., and coins continued to be struck with some degree of autonomy up through the mid-first century B.C. They continued nominally under the Roman Empire, with the last issues produced under the Emperor Gallienus (A.D. 253 to 268).

The most recognizable types of this league are silver staters with the head of Zeus on the obverse and the striding figure of Athena on the reverse. A companion issue of silver drachms substitutes Zeus’ head with that of Apollo. Another familiar drachm type pairs the helmeted head of Athena with a trotting horse. All of these coins were struck between about 150 and 40 B.C.

Another substantial league was formed in Aetolia, a region in the south-central part of the Greek mainland. Most (if not all) of its coins seem to have been struck between about 250 and 150 B.C. in the form of silver tetradrachms, staters and triobols, a variety of bronzes and some very rare gold issues.

Most Aetolian League designs reflect local interests, though some are borrowed from the ubiquitous coinage of the Macedonian King Alexander the Great (336 to 323 B.C.). The reverse types are especially interesting, depicting a female warrior (“Aetolia”) seated on a pile of shields, a nude warrior with a spear, posed with one foot upon a rock, the Calydonian boar running above a spear head, military trophies and the jawbone of a boar.

The island of Euboea (“the land rich in cows”) had its own league, which began to strike coins as early as 375 B.C. and continued doing so for two centuries or more.

Not surprisingly, cows are the prominent design. Other designs include the head of the local nymph, clusters of grapes, a butting bull, an octopus, a grain ear and the prow of a galley.

The district of Achaea was located in the northern portion of the Greek Peloponnesus and originally was ruled by 12 city-states that found it useful to confederate. The league’s earliest coins were ceremonial issues of circa 370 to 360 B.C., but its most recognizable coins are the silver hemidrachms and small bronze coins struck from about 250 to 31 B.C., which bear the portrait of Zeus on the obverse and the league monogram in a laurel wreath on the reverse.

Perhaps 38 of the cities that eventually claimed membership in the Achaean League struck coins bearing league designs and inscriptions and or symbols by which their coins could be distinguished from those of other league members. The final issues were struck just prior to 31 B.C., when Octavian (Augustus) won control of the Mediterranean world after his victory at the Battle of Actium.

This league in the center of the Peloponnesus was based in Megalopolis (“the great city”), a city created by founders from three Arcadian cities and two Arcadian tribes. Four cities struck coins for the league, with the first issues dating to the 470s B.C.

One important league outside of Greece proper was the Lycian League, based in a mountainous region of southern Asia Minor. As with the Achaean League coinage, the inscriptions on these coins allow them to be attributed to individual cities or districts, and they may be collected in this fashion. Some notable minting centers include Xanthus, Pinara, Tlos, Myra, Limyra, Phaselis and Cragus.

Most of its early league coinage consists of silver drachms and hemidrachms that show the head of the god Apollo and a lyre. However, beginning with the reign of Rome’s first emperor, Augustus (27 B.C. to A.D. 14) and then continuing selectively through the reign of Trajan (A.D. 98 to 117), the portrait of Apollo is replaced with that of the reigning emperor. ¦