Coinage of the ancient Persian Empire 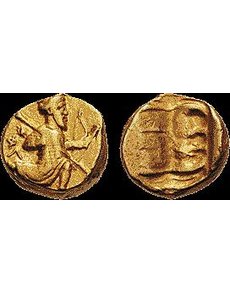 After the Persian Empire was overthrown by Alexander the Great, Persian coin designs were adopted by Greek kings in the region of Babylon. This gold daric dates to circa 331 to 311 B.C. 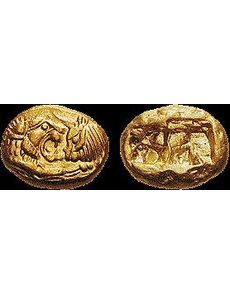 The first Persian royal issues copy those of the defeated Lydian King Croesus. The obverse of this circa 545 to 520 B.C. gold stater shows a lion confronting a bull. 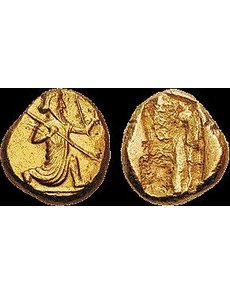 A Persian gold daric of the late fifth or early fourth century B.C. shows the king, or a hero, holding a bow and spear. 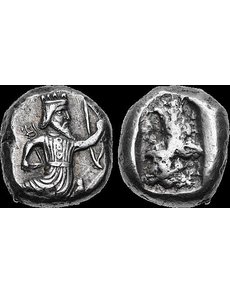 Dating from the late fifth or early fourth century B.C., a silver siglos portrays a kneeling king, or hero, holding a bow and a dagger.

One of the great civilizations of the ancient world was that of the Achaemenid Persians. Not long after their empire was founded, the kings of Persia began to strike coins in large quantities, making their principal issues — gold darics and silver sigloi — among the most familiar coins of antiquity.

The origins of the Achaemenid (Persian) Empire are shrouded in mystery. The handful of documents that reference the early period of the empire lack detail and are subject to widely varying interpretation.

It would seem that by about the 10th century B.C., the Persians began migrating to Persis, the Fars province in the southwest part of modern day Iran, which was then part of the Elamite Kingdom. Over time, the Persian tribes forged a political identity and there is good reason to believe that soon after 650 B.C., the Persian Empire was founded.

The first Persian king to be mentioned in historical texts (rather than in genealogical lists composed later in history) is Cyrus “the Great” (circa 559/8 to 530 B.C.). He conquered vast territories from parts of Central Asia to Lydia and Phoenicia, transforming his once-vulnerable state into the greatest power in the Western world.

Cyrus initiated Persian Imperial coinage upon defeating King Croesus of Lydia in 547 B.C. Croesus had already been issuing gold and silver coins of high purity that showed on the obverse the confronted foreparts of a lion and a bull. Evidence from coin hoards suggests that Cyrus and his immediate successors continued to issue coins of the Croesid type.

The next Persian king of note was Darius I (522/1 to 486 B.C.), who built upon the victories of Cyrus. He conquered territories from modern Greece to Pakistan, and from the Caucasus to the Persian Gulf, and even occupied part of the Libyan desert in North Africa. His exploits were not all successful, though. Darius’ most memorable defeat occurred in 490, when his invasion of Greece was halted at the Battle of Marathon.

Darius seems to have introduced the first distinctive Persian coinage in about 520 B.C., with silver coins of a denomination called a siglos. It showed a bearded, crowned archer — most likely the king, but often described as a “royal hero” — seen from the waist up in a very stiff pose. He holds a bow in his outstretched left arm and two or three arrows in his right hand. The rarity of these earliest pieces suggests they were struck in small quantities.

Just like the earlier Croesid issues, these Persian royal coins are uniface, with the reverse bearing the impression of a simple punch with an irregular surface that was meant to grip the planchet.

In about 510 or 505 B.C., Darius followed up with a new version of his original type, which shows the archer in full form. This time he wears a quiver with arrows on his back, and is shown in a kneeling pose; his right knee is placed on the ground as he prepares to release an arrow.

Darius produced coins with his new design in both silver and gold. In Greek sources the new gold pieces are called darics (presumably a reflection of Darius’ name) or toxotai (“archers”), and they appear to have been equal to 20 of the silver sigloi. Fractional denominations were occasionally struck, but the practice was unusual.

Sigloi appear to have circulated only in the westernmost Persian territories — the central, coastal regions of modern Turkey. Darics, however, circulated widely. They no doubt had more uses, including the payment of governmental, military and diplomatic expenses, and once they entered circulation, they would have been readily accepted as bullion anywhere.

Persian royal coinage acquired its most familiar design a few years later when a new version of Darius’ type was introduced between about 490 and 480 B.C. — perhaps early in the reign of his son, Xerxes (486 to 465 B.C.). It shows the archer in a nearly identical position, though he now appears to be simultaneously running and kneeling. Also, instead of drawing his bowstring, he holds the bow in his extended left hand and in his right hand holds a spear.

Xerxes almost certainly was issuing these coins by the time he launched his vengeful follow-up campaign against the Greeks (480 to 479 B.C.), which also failed. In spite of that great defeat and the loss of some territories in the East, the Persian Empire under Xerxes remained the most powerful force in the Western world.

This basic design of Xerxes’ darics and sigloi would serve the Persians for more than 150 years, until the collapse of the empire, with the only major change being that, in around 450 B.C., some of the coins begin to show the archer holding a dagger rather than a spear. The quality of die engraving declines from the introduction of his coinage until about 375 B.C., after which there is a marked improvement in quality.

The last kings to rule the mighty Persian Empire were Darius III (336 to 330 B.C.) and his turncoat successor Artaxerxes V (330 to 329 B.C.). The Macedonian king Alexander III “the Great” (336 to 323 B.C.) invaded Asia Minor during the reign of Darius III and was victorious at every turn. Over the course of five years, Alexander defeated the Persians and toppled their empire, with the Greek victory completed by the execution of Artaxerxes V.

Though the fall of the Persian Empire brought an end to Persian coinage, the familiar archer design survived, for it was adopted by Alexander and his successors, who, until about 300 B.C. made their own version for local use, seemingly in the region of Babylon.

In addition to the Persian royal darics and sigloi, many smaller issues were produced by regional governors, called satraps. In contrast to the royal issues, these coinages are varied in both denomination and design, thus adding an interesting (and challenging) facet to any collection of Persian coinage. ¦