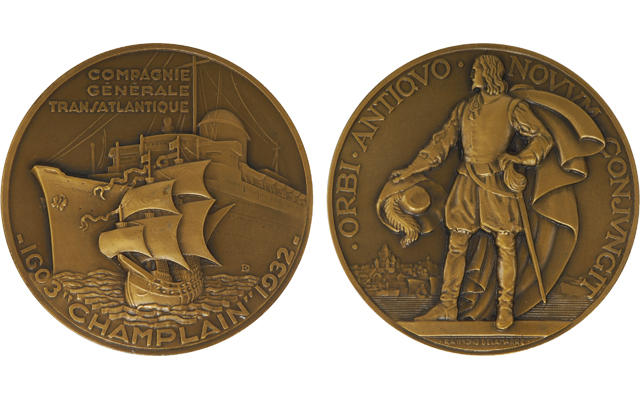 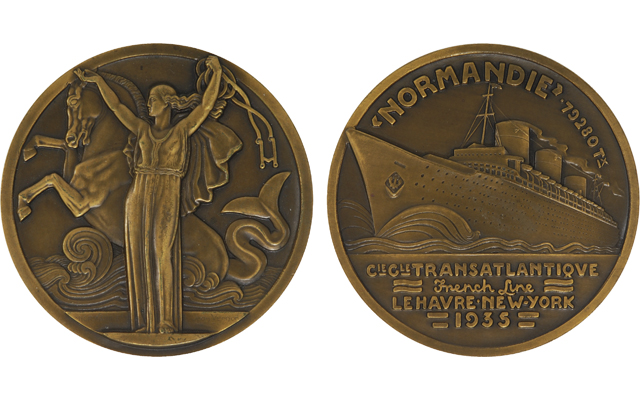 Fashionable travel — on a medal

Leader in fashionable travel in the 1930s was the French Compagnie Generale Transatlantique (CGT), known in the United States as the French Line. CGT released 68-millimeter bronze medals hailing two of its legendary ships, the SS Champlain in 1932, in a work by Raymond Delamarre, and the SS Normandie in 1935, the work of Jean Vernon.

The first bears the standing figure of 17th century French explorer Samuel Champlain gazing toward the modern city of Quebec with Latin legend translating to “He Joined the Old World with the New.” On the reverse, his small two-masted sailing ship is posed dramatically next to the towering 20th century ocean liner bearing his name.

An uplifting design dominates Vernon’s 1935 medal of SS Normandie, the largest, fastest and heaviest passenger ship in the world when it was launched in 1935. The obverse presents a standing female figure holding aloft a bridle and reins, ready to subdue a huge rearing sea horse filling the background amid boldly stylized waves.

The reverse presents the great ship cleaving the waves toward the left, the sharp point of her prow piercing the outer edge as if preparing to leave the medal. Her initial weight of 79,280 tons is part of the legend, the lower inscription notes her home port and destination, LE HAVRE. NEW-YORK.

Normandie the ship was a monument to luxury and to triumphant Art Deco design, seizing the headlines for speed and a passenger roster of the world’s most glittering celebrities. Economically, however, the great ship barely earned its expenses and never paid off government loans that had covered its construction.

The emphasis on First Class passengers alienated Second and Third Class travelers. Its Art Deco décor proved a disadvantage, intimidating many passengers used to the cozy atmosphere of competing British Cunard Line vessels such as the Mauretania, Queen Mary and Queen Elizabeth. The French vessel was interned at her New York City berth in September 1939 at the outbreak of war. Normandie was seized for the U.S. Navy and renamed the USS La Fayette, before burning and capsizing at its New York pier under circumstances never fully explained.