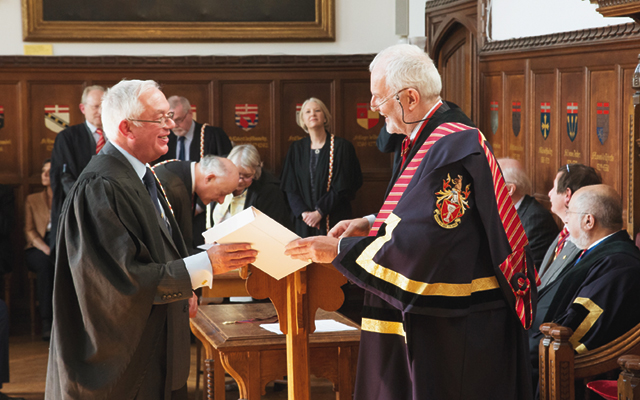 Coin World London correspondent John Andrew, left, has been admitted to the Livery of The Worshipful Company of Art Scholars.

Image courtesy of the Livery of The Worshipful Company of Art Scholars.

John Andrew, who first wrote for Coin World and its related publications in 1973 and has been the London correspondent for Coin World for nearly 40 years, was recently honored in the city of London.

On May 14, he was admitted to the Livery of The Worshipful Company of Art Scholars.

Andrew became a Freeman of the organization when it was just a guild, in 2009. Earlier this year it became the City of London’s 110th Livery Company.

July 3, Andrew attended the luncheon at the lord mayor’s official residence, the Mansion House in the City of London, where the lord mayor (who, when newly elected each November, rides from the city to Westminster and back in a golden coach having sworn an oath of loyalty to the queen) presented the Company with its Letters Patent.

As well as being a Liveryman of the city’s newest livery company, Andrew is also an Associate of one of its oldest, The Worshipful Company of Goldsmiths, which received its Royal Charter in 1327.