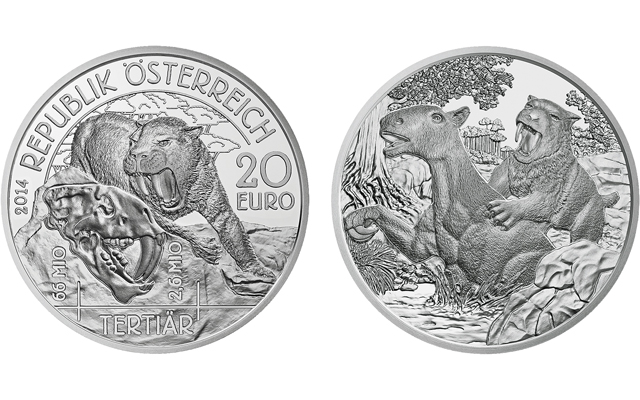 Austria’s latest “Back from the Dead” series of Proof .900 fine silver 20 coin takes collectors to the Tertiary Period.

The Austrian Mint’s fourth coin in the popular “Back from the Dead” coin series is set for release Sept. 10.

The obverse of the silver coin features a saber-toothed cat (Smilodon) with its powerful teeth, ready to pounce. The skull on the obverse is also of a Smilodon, its distinctive teeth visible.

The continual timeline along the bottom portion of the coin reflects a time period from about 30 million to 2.6 million years ago. This timeline links all of the coins in this series, from the earliest period to more recent times.

The obverse also includes the country of issue, REPUBLIK ÖSTERREICH, the year of issue 2014 and the denomination.

The reverse of the coin shows a Smilodon attacking an herbivore known as a Chalicotherium.

The background designs on both sides of the coin depict the swampy landscape of this cooling period when glaciers formed over the South Pole.

Both sides of the coin were designed by mint engraver Helmut Andexlinger.

The coin weighs 20 grams, measures 34 millimeters in diameter and has a maximum mintage of 50,000 pieces.

The Austrian Mint also developed an augmented reality application related to this coin series and has updated the program for this launch.

APMEX and Downies will offer the coins to collectors in the United States and Canada for prices ranging from $75 to $80 in U.S. funds.