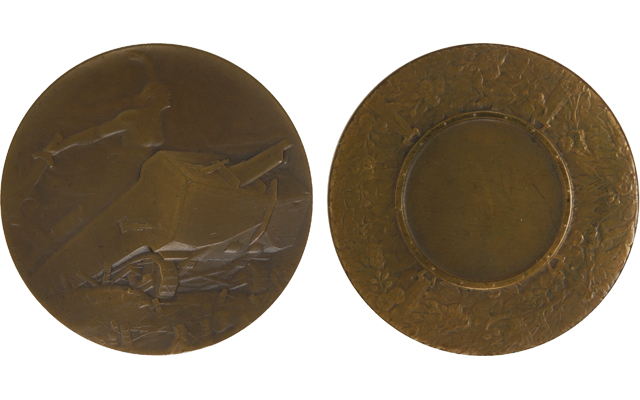 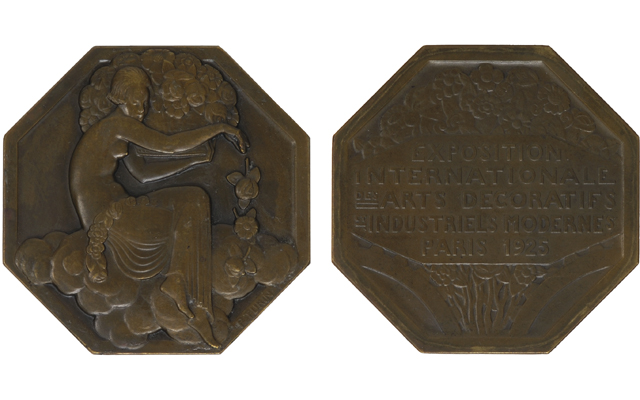 Art Deco took its name from the 1925 Paris exposition, recalled by Turin’s 60-millimeter medal with damsel, clouds and flowers personifying the new style. 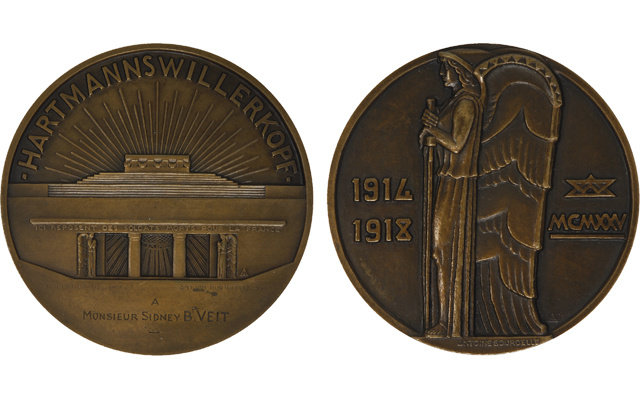 C Pierre Turin and Antoine Bourdelle captured exaltation of victory and somber memorialization in their 72.3-millimeter medal of the mausoleum-memorial at Hartmannswillerkopf. 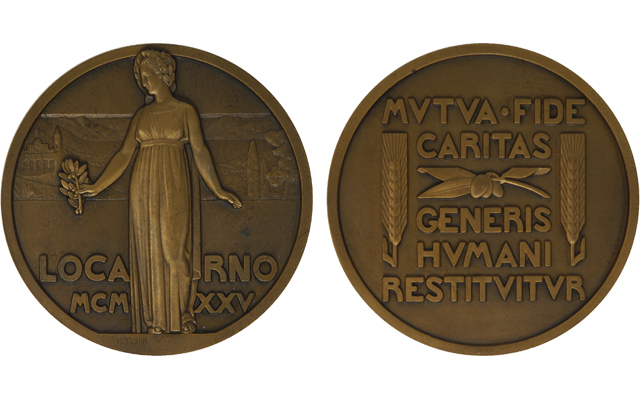 German medallic art took off in a new and increasingly harsh direction that attempted to capture the impersonal vastness of a war being mercilessly fought on several fronts and continents. Artists including Karl Goetz, Ludwig Gies and Arnold Zadikow created a new and harshly realistic genre that separated Germany from the next artistic movement that would soon transform French medallic art.

Transitional designs foreshadowing another dramatic shift in the French art of the medal included two notable medals by Pierre Alexandre Morlon (born 1878, died 1951). Merci! (that is, “Thanks!”) is a plaquette reflecting the nightmare trench warfare on the Western Front. It shows a surprised and delighted French Poilu (rifleman) in full uniform and helmet receiving a kiss from Marianne, the spirit of France, clad in a diaphanous garment.

Far more warlike but retaining Art Nouveaux overtones is Morlon’s 1921 Char d’Assaut (meaning “Tank”) showing a bare-breasted Marianne flying with naked sword, urging forward a clumsy early tank lumbering across No Man’s Land. Both of these designs show the earliest evidence of the arrival of the next artistic transformation, Art Deco.

A new direction in art style

This term has been attributed to the great architect Charles-Édouard Jeanneret-Gris, known as Le Corbusier (born 1887, died 1965) and his influential journal, L’Esprit nouveau. It referred specifically to the 1925 Exposition Internationale des Arts Décoratifs et Industriels Modernes (International Exposition of Modern Decorative and Industrial Arts), which set the direction for postwar French — and ultimately, world — art.

This new direction is clear on the 60-millimeter octagonal bronze medal of this trend-setting expo, designed by Paris Mint artist Pierre Turin (1881, died 1968), who quickly emerged as one of the supreme masters of Art Deco. Its obverse bore a muse seated on clouds bearing a huge basket of flowers, dropping blossoms in a straight line toward the earth below; the reverse presented a five-line expo inscription in sans-serif lettering over a rich growth of flowering plants.

Art historians such as Bevis Hillier give Art Deco far more ancient roots, including forms of pre-modern art from all over the world. One influential advocate of such remote origins was the late Bernard Davis, president-director of the Miami Museum of Modern Art (died 1973), whose institutional collection traced the origins of modern art to pre-historic, aboriginal and primitive arts.

However that may be, Art Deco quickly invaded the realms of painting, sculpture, fashion, automobile and train design (particularly “streamlining”) and above all, architecture. Many classic examples survive and are admired today all over the world, from New York City’s Chrysler Building to the heroic statue of Christ on the Corcovado overlooking Rio de Janeiro, Brazil.

Summing up both schools, art historians have characterized earlier Art Nouveau as asymmetric, polychromatic and picturesque. Art Deco is defined in terms of order, color and geometry or voluntary simplicity, obvious symmetry and harmony. Art Deco architecture and interior furnishings show a luxury and smooth solidity that captured the adventurous mood of the Roaring Twenties.

Remarkably, it enjoyed continued popularity in the Great Depression of the 1930s, an era characterized by economic dislocation, unemployment and hunger. In the United States, Art Deco dominated public architecture and the graphic work sponsored by the Works Progress Administration under President Franklin Delano Roosevelt’s New Deal.

Medals whose designs reflect Art Deco styling or influence are numerous and uniformly beautiful. Today’s collectors most often see French or American examples, with some noteworthy exceptions. All are notable for the boldness of their designs, the stark relief of their devices, sweeping lines and emphatic simplicity.

Art Deco lent itself to commemoration of significant events and anniversaries of the postwar world. It enthusiastically embraced modern technology, and proved itself especially well-suited to seafaring themes and the rapidly expanding world of aviation. By the middle 1920s, diplomatic settlements, war anniversaries and dedications of memorials were providing plentiful subject matter for medallic commemoration.

Turin’s 72.3-millimeter 1925 bronze medal marking dedication of the Hartmannswillerkopf Monument designed by Antoine Bourdelle recalled a savagely fought battle at that Vosges Mountain strongpoint. Both memorial and medal are purely Art Deco. The obverse presents a tall standing archangel with massive wings holding an enormous sword with dates 1914-1918 and 1925. The reverse bears a detailed study of the radiant entrance to this tomb memorial whose entrance is inscribed ICI REPOSENT DES SOLDATS MORTS POUR LA FRANCE, which translates to “Here Rest Soldiers who Died for France.”

Pierre Alexandre Morlon (born 1878, died 1951) created a 68.3-millimeter bronze medal for the December 1925 signature of the Locarno Pact, bearing a very high relief figure of Peace gazing toward the Swiss village where the seven-nation treaty was signed. Starkly simple wheat ears and olive branch on the reverse are joined by a Latin inscription assuring the world that “Love of the Human Race is Restored by Mutual Confidence.”

Under this pact, Britain’s Austen Chamberlain, French Premier Aristide Briand and Germany’s Gustav Stresemann guaranteed Germany’s 1919 western frontiers but left its disputed eastern borders open to negotiation. This was a startling letdown for allies Poland and Czecho-Slovakia and opened the door for future disputes.