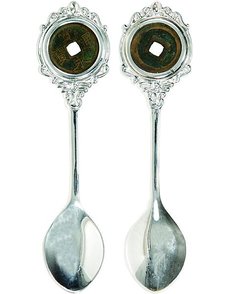 Asian coin spoons, when available, are often made with replica coins. This do-it-yourself collector placed a genuine Japanese cash coin into a spoon blank designed to hold a quarter dollar. 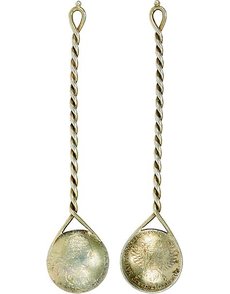 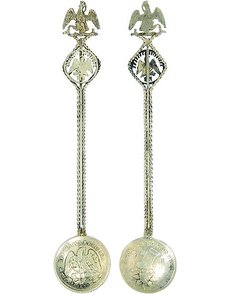 The cut coin in the handle of this Mexican souvenir spoon is a 10-centavo piece while the bowl is made from an 1877 25-centavo coin. The finial’s design comes straight from the larger of the two coins and is also part of Mexico’s coat of arms. 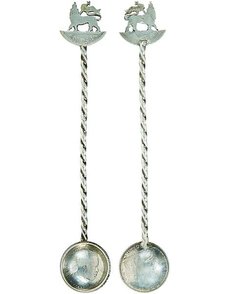 This coin spoon from the late 1800s is made with two silver quarter birr coins from Ethiopia. Silver coins were easy to cut and shape so they were popular with spoon makers. 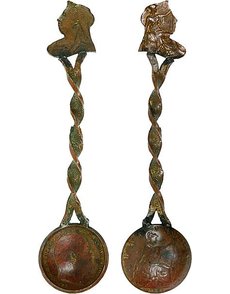 An unusual spoon was made from three farthings with obverses featuring two monarchs. The handle is actually a twisted 1909 Edward VII farthing. The finial is a carved Victorian farthing and the bowl is another Edwardian coin. 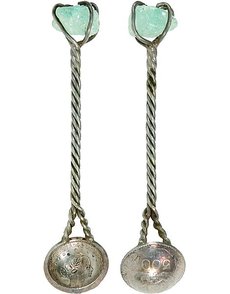 Brazilian coin spoon has a silver 1913 500-real coin bowl and a chunk of locally mined aquamarine for a finial. 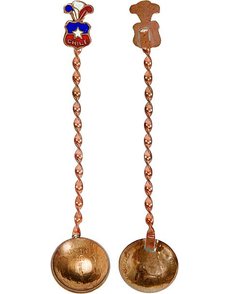 Post World War II spoon from Chile features a 1946 copper peso bowl and a red, white, and blue enameled finial. The bellflower or copihue on the coin is the national flower of Chile. 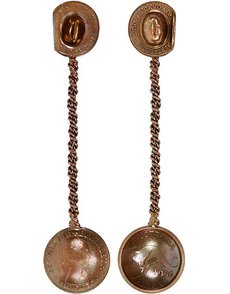 Known as a figural spoon, this item is made from two pre-decimal Australian coins. The bowl is 1956 penny and the finial, a 1911 half penny shaped to look like a soldier’s slouch hat. 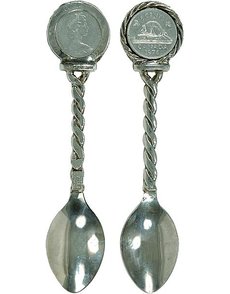 Many Canadian souvenir spoons are available made from or with coins. This simple example starts with a steel blank to which a 1976 Canadian 5-cent has been attached as the finial. 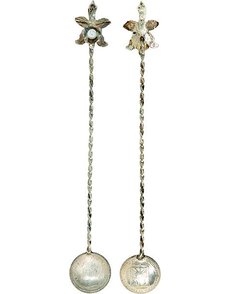 This delicate-looking silver spoon has an orchid finial with pearl center and a 1960 coin for the bowl. The national flower of Venezuela is the flor de mayo orchid, one of 25,000 orchid species in the rainforest of that nation.

The hybrid offspring of coin and spoon collecting traces its roots back to the 1851 Crystal Palace Exhibition in London. Visitors took away a new item, the souvenir spoon, and a worldwide collecting phenomenon was born. Stores catering to tourists carried a variety of engraved silver or enameled spoons celebrating the nearest city, celebrity or big event. At the 1893 World’s Columbian Expo in Chicago, souvenir spoon collecting rose to the level of a national craze.

The coin spoon is just one type of souvenir spoon. Coins were found to be the ideal raw materials for local crafters to use for spoon making. A coin spoon will have a finial, handle, bowl or more than one section made from a legal tender coin. Many of the spoons are silver since that metal is easy to work with, but coin spoons come in a variety of metals. Coins may be cut, carved, rounded, rolled and twisted to make spoons.

By World War II the popularity of coin spoon collecting waned, but the hobby has not disappeared. The U.S. Mint, for one example, manufactured coin spoons in conjunction with the 50 State quarter dollars program beginning in 1999. And there are do-it-yourself opportunities.

Coins of all ages show up in spoons, even ancient ones. An older example contains a one-year-type silver 1792 Saxony 2-groschen coin (a 1-mark piece). The simple but elegant twisted handle is also made of silver and common for spoons made in the 19th century. Typically, a coin’s value is lowered after being altered but that is not the case with this well-made item. A spooner, as spoon collectors call themselves, would pay as much or more for the spoon made from the Saxony 2-groschen coin as a coin collector would pay for the coin alone in its pre-alteration grade.

Souvenir chopsticks, not spoons, are popular with tourists visiting Asia, so it can be difficult to find a coin spoon from that part of the world. One do-it-yourself collector addressed the need by placing a Japanese cash coin made between 1626 and 1759 into a modern silver-plated spoon blank designed to hold a U.S. quarter dollar.

Mexican artisans have used coins as raw materials in a variety of souvenir items since the late 1800s, including ashtrays, coin jewelry and spoons. One common design uses two silver coins. The illustrated spoon features an 1877 25-centavo coin as the bowl and a 10-centavo coin decorating the handle. The smaller coin has been cut out by the artist and no longer has its date but was probably made around 1900.

Travelers to Africa in the late 19th century could find coin spoons for sale, too. An Ethiopian example has a bowl fashioned from a silver 1897 (1889 on the Ethiopian calendar) quarter birr with another coin that has been cut out for the finial.

A bronze spoon from Great Britain is made with three farthings from the reigns of two different monarchs. The terminal is a cut Victorian coin with no date visible. The coin twisted into a handle has a readable 1909 date and the bowl is a 1906 farthing.

Brazil has advertised its gemstone wealth with souvenir spoons for more than a century. Tourists can purchase spoons with gemstone finials made of amethyst, emerald, topaz and more. Some of these have bowls made from Brazilian coins. A coin spoon topped with a chunk of Brazilian aquamarine uses a one-year-type silver coin for the bowl, a 1913-A 500-real piece.

Spoons enameled in bright colors have always interested collectors. A coin spoon from Chile continues the tradition of enameling on the coat-of-arms finial while the bowl is fashioned from a 1946 copper peso.

A unique coin spoon designed to celebrate the culture of Australia features a bowl shaped from a 1956 Kangaroo penny. It is topped with a 1911 half-pence finial that has been mechanically reshaped to resemble a soldier’s slouch hat. The two different monarchs on the coins are Queen Elizabeth II and King George V.

The orchid is the national flower of Venezuela, as advertised by a silver coin spoon with a delicate orchid and pearl finial, and a twisted handle. The coin bowl is a silver 1960 50-centimo piece. These were mass-produced for the tourist market until production of silver circulation coins was ceased in the late 1960s.

Spoons with Canadian coins have been made for the last 125 years from every denomination up to the modern Loon dollar. One inexpensive example is a Canadian 1976 Beaver 5-cent coin that has been attached to the finial. This souvenir is not so much made from a coin as with a coin.

Counterfeits are a problem in this area, as with traditional coin collecting. Buyers should be cautious about purchasing mass-produced coin spoons made in China. Some of these contain replicas that are marketed as genuine coins.

The golden age of coin spoons was 1875 to 1945, although many examples are available. It is not too late to start or expand a collection of spoons featuring the fascinating coins of our world. ¦