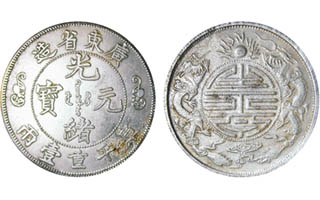 Finding unusual items while searching rolls of coins is part of the fun. This piece resembles an 1888 1-tael pattern piece from China but it is not “the real McCoy,” the author observes.

Since my previous column pertained to a Mardi Gras doubloon that was found in a roll of what should have been all large-sized dollar coins, I would not, as a rule, write in a consecutive column about another item that was discovered in the same type of coin roll.

Generally, I like to mix things up a little by jumping from one denomination to another each month. As it happens though, this month’s most interesting find emerged from another roll of Eisenhower dollars that I was able to obtain from my local bank. I will therefore break my own self-imposed rule, as I really want to share the discovery of this piece.

While opening up the roll and subsequently sliding the coins out onto my table, I was immediately intrigued by the edge of one particular piece that stood out like the proverbial “sore thumb.” This piece’s edge had that look of silver that all roll searchers have come to know and enjoy. Since I’ve been lucky enough to find some older Morgan or Peace type silver dollars in rolls, I was hoping that lightning was about to strike once more.

Even if the piece turned to be something other than an earlier issue dollar coin, it might still have been a more recent but still neat to find silver alloy Eisenhower dollar that got mixed in with the usual copper-nickel clad coins that I would expect to find. Well, this unusual piece fell into a category that I would label as “none of the above.”

Seeing some obvious design features, including dragons and Chinese characters, I knew right away that I was looking at a piece that theoretically originated in China.

Unfortunately, it took less than 10 seconds to determine that this thing was, in alphabetical order; bogus, counterfeit, deceptive, electroplated, fake — you get the idea! Even the ring of this item was more like a “THUD” when I dropped it on the surface of my table.

Having a slippery feel to it, this is an older style counterfeit type, where there is a base metal that has been plated with something resembling silver. A close look at portions of the piece’s surface shows the plating bubbling and peeling away from the base metal underneath.

Still, even a fake is usually modeled after a real coin, so I wanted to find out just what this counterfeit piece was made to resemble.

Referencing page 225 in my copy of the seventh edition of the Standard Catalog of World Coins 1801-1900, Krause Publications, I was able to confirm that this piece is a counterfeit based upon a rare, undated (circa 1888), Kwangtung Province 1-tael pattern piece. If only it were the real McCoy!