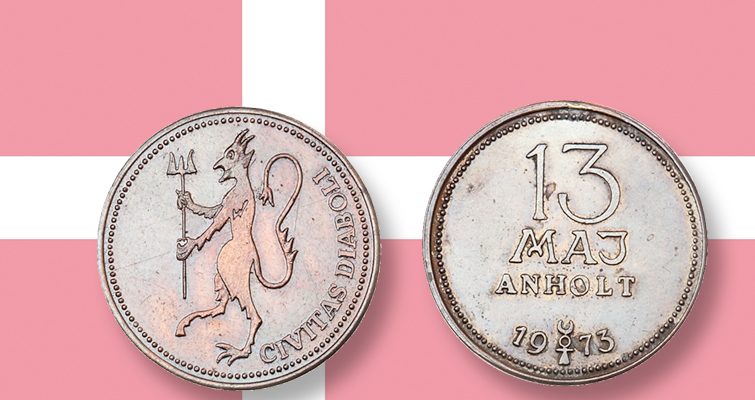 A copper “coin” from Anholt, Denmark, is tied to a famous hoax. It’s being offered at auction Aug. 2.

A “satanic coin” tied to a famous hoax in Denmark is coming to auction.

Anholt is a tiny island in the North Sea between Jutland and Sweden, but its infamous numismatic output is one for the ages.

Bruun Rasmussen’s Aug. 2 auction includes one of the copper pieces from a curious episode of history.

The pieces are evidence of a multinational prank orchestrated by a mild-mannered Danish art gallery clerk.

These pieces measure 32 millimeters in diameter and weigh 10.85 grams, making them slightly wider but slightly lighter than a copper-nickel clad Kennedy half dollar.

They feature a horned, cloven-hoofed devil with a trident and the legend CIVITAS DIABOLI (meaning country or citizenry of the devil) on the obverse and, on the reverse, 13 MAJ ANHOLT 1973 (13 March Anholt 1973).

These pieces most recently entered the public eye when in June 2018 a renovation at Bath Abbey in the United Kingdom revealed two examples beneath some 19th century stalls.

Much of what is known about the pieces and the hoax is thanks to a June 27, 2018, article by The Independent.

Source of the hoax

The hoax began in May 1973, at around the time of a full moon, when residents of Anholt began finding signs of satanic rituals in an isolated area they called “the desert.”

The “devil coins” started appearing soon after. For years, people kept finding them: in church crypts, behind statues, even on one occasion behind paintings at the police headquarters in Copenhagen.

As of that 2018 article, approximately 370 “devil coins” had been found, many in Denmark, but also in tourist destinations around Scandinavia.

The origins of the pieces, and the hoax, was revealed in 2013, when a Danish newspaper reported that it had all been a massive practical joke perpetrated by one Knud Langkow, an otherwise unremarkable telephone clerk at the National Gallery of Denmark, according to The Independent. He died in 2004 at the age of 73.

Their fanciful origin creates demand for the pieces today.

The offered piece (condition is unassigned by the auction house) has an estimate of 600 Danish krone (about $92 U.S.) but bidding had doubled that two weeks before the sale. Heaven only knows the final price for this quirky numismatic curiosity. 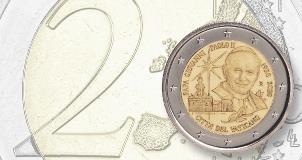 Denmark businesses could go cashless as early as next year