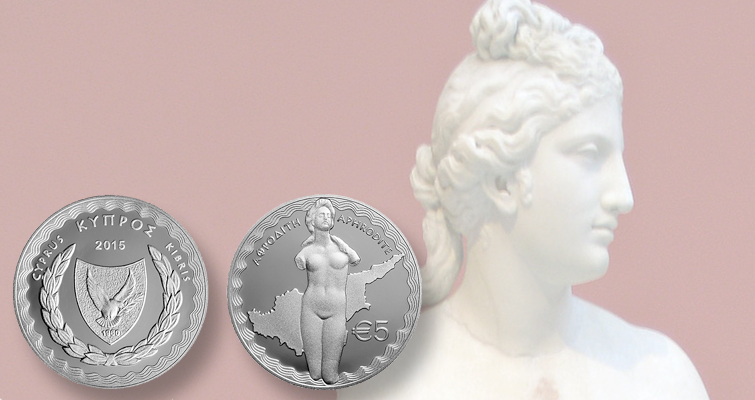 A new 2015 Proof silver €5 coin from Cyprus shows a statue of Aphrodite, the goddess of love.

Images courtesy of the Central Bank of Cyprus.

The Central Bank of Cyprus announced the coin Sept. 21.

The reverse of the coin features a statue of the goddess that was found on the island. The marble statue depicts  Aphrodite nude, and lacks most of each arm, her hands, lower legs and feet.

The statue dates to the Hellenistic period, first century B.C., and was found at Soloi. It can be visited at the Cyprus Museum in Nicosia and is considered as a point of reference for historians studying aspects of the cult of Aphrodite in Cyprus.

The obverse of the coin features the emblem of the Central Bank of Cyprus and year of issue.

The designer is George Stamatopoulos and the coin was minted by the Greek Mint.

The Greek Mint issued the coin priced at €40 each.

U.S.-based distributor Royal Scandinavian Mint will carry the coin, but has not set a price.