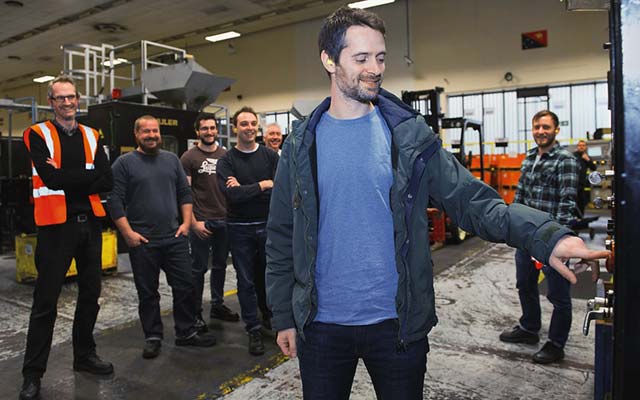 Coin designer Jody Clark of the Royal Mint recently was offered the chance to begin striking the circulating coins bearing his effigy of Queen Elizabeth II. 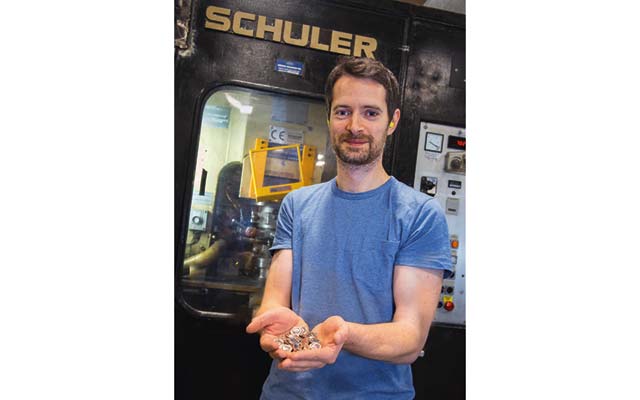 Jody Clark holds a handful of 2015 20-pence coins bearing the effigy of Queen Elizabeth II that he designed. 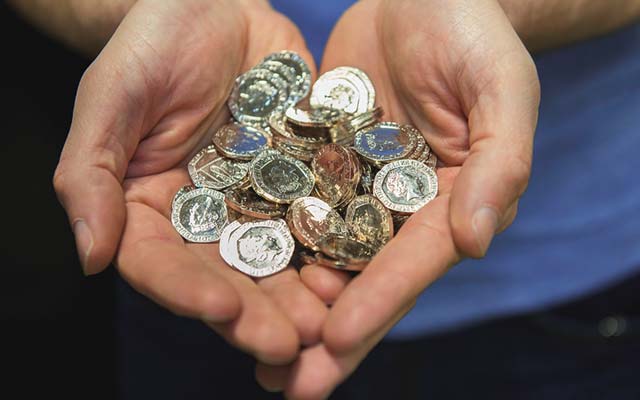 The designer of the fifth definitive coinage portrait of Queen Elizabeth II has kicked off production of the new 2015 circulating coins that will soon become a familiar sight across the United Kingdom, the Royal Mint announced on April 17.

Royal Mint designer Jody Clark was offered the privilege of starting up the presses striking his own depiction of Queen Elizabeth II on all newly issued U.K. coins for general circulation.

Just 33 years old when his design was selected from a number of anonymous submissions to a design competition, Clark is the youngest of the five designers to have created the portraits of Queen Elizabeth II that have appeared on U.K. circulating coinage during her 63 year reign.

He is the first Royal Mint engraver to be chosen to create a definitive royal coinage portrait in more than 100 years. His is only the fifth definitive portrait of Queen Elizabeth II to appear on circulating United Kingdom coins since her accession to the throne in 1952, making it a very rare event indeed.

When it begins to appear in change it will become the fourth portrait currently in circulation, joining those created in 1968, 1985 and 1998; together, the coins that carry the various portraits tell the story of Queen Elizbaeth II’s lifetime and paint a compelling picture of the story of her reign.

Commenting on the honour of being selected, Clark said: “I really liked the four previous coin portraits — each one is strong in its own way. I hope that I’ve done Her Majesty justice and captured her as I intended, in a fitting representation. The news that my design had been chosen was quite overwhelming, and I still can’t quite believe that my royal portrait will be featured on millions of coins, playing a small part in The Royal Mint’s 1,000 year history.”

“There is going to be a competition with my colleagues to see who can be the first to find one in general circulation. That will be the best bit for me, seeing my design on a circulating coin which is a bit battered and knowing that it’s been on a journey.”

Adam Lawrence, Chief Executive of the Royal Mint, said: “This change of royal portrait will make 2015 a vintage year for UK coins, and it will be hugely exciting for us all to see the new design appear on the coins we use every day.

“Jody’s achievement is something that we can celebrate as a proud moment for The Royal Mint. Capturing a portrait on the surface of a coin demands the utmost skill, and is one of the most challenging disciplines of the coin designer’s art. The last Royal Mint Engraver to be commissioned to undertake a royal portrait was George William de Saulles, who engraved the portrait of Edward VII which first appeared on the coinage in 1902.”

Clark’s portrayal of the queen wearing the Royal Diamond Diadem crown worn for her Coronation was selected in a closed competition organized by the Royal Mint Advisory Committee, a consultative panel to the U.K. Treasury, comprising experts from such fields as history, sculpture, architecture, art and design.

RELATED: See coinage portraits of Queen Elizabeth II from throughout her reign

A number of specialist designers from across Britain were invited to submit their own interpretations of the queen’s portrait under anonymous cover, and each one was judged on its merits and suitability before the winning artwork was recommended to the Chancellor and, ultimately, Queen Elizabeth II for approval.

The public are being asked to keep a watchful eye on their coins later this year when the new portrait will start to appear in circulation and share their photos at on Facebook or at Twitter.