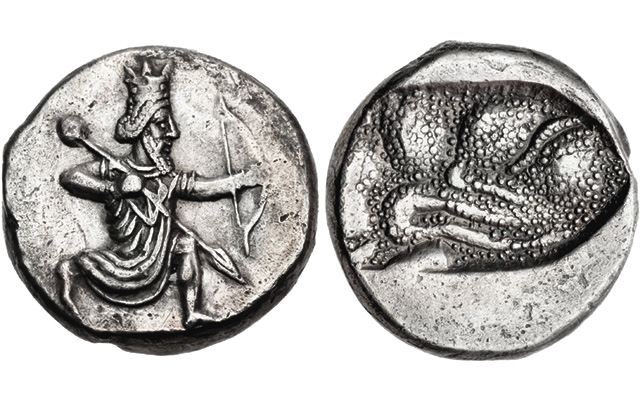 A circa 350 to 333 B.C. silver tetradrachm from Ionia, during the Achaemenid Period, may show a relief map of the region. 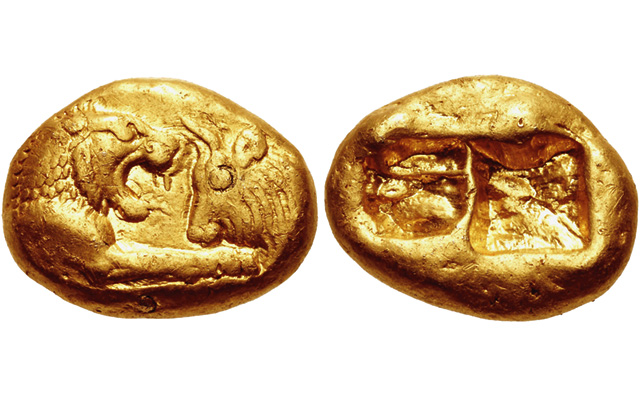 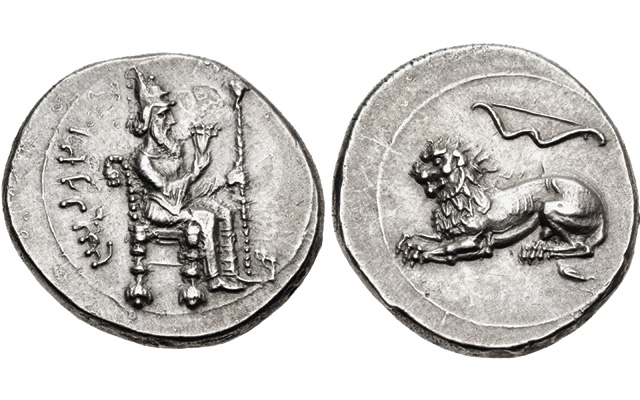 A circa 361 to 334 B.C. silver stater from Tarsos might depict the ruler Artaxerxes III as Pharaoh. It is estimated to realize $50,000. 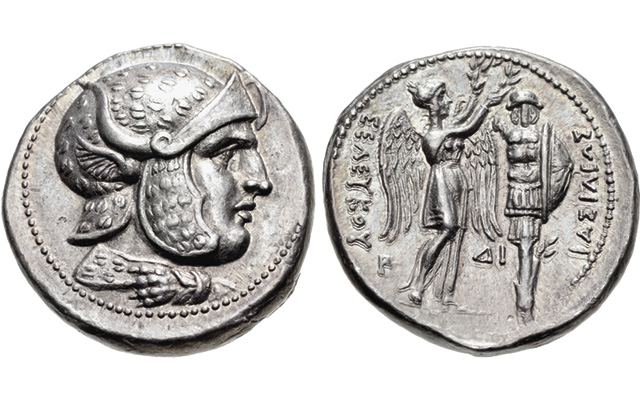 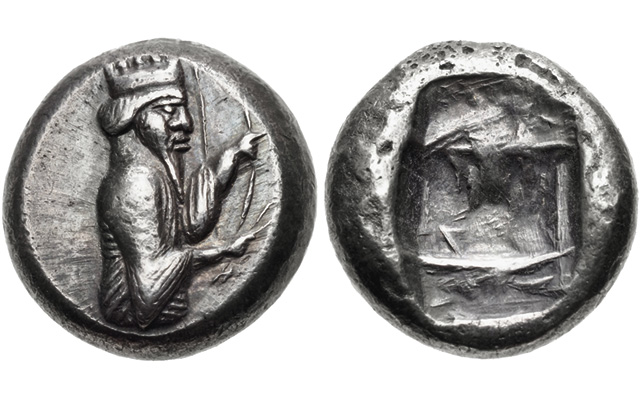 LANCASTER, PA – Classical Numismatic Group of Lancaster, Pennsylvania and London, England is proud to present Triton XVIII, a Public, Internet, and Mail Bid Sale to be held in conjunction with the 43rd Annual New York International Numismatic Convention (NYINC) on January 6-7, 2015. The NYINC is held at the Waldorf-Astoria Hotel, located at 301 Park Avenue, New York, NY 10022, between 49th and 50th Streets.

One of the featured collections highlighted in Triton XVIII is the Sunrise Collection. In 2011, Classical Numismatic Group published The Numismatic Art of Persia: The Sunrise Collection. Part I: Ancient – 650 BC to AD 650. The Sunrise Collection of the coinages of ancient Persia represents one of the finest private collections of this coinage ever compiled, covering all of the numismatically active cultures along the great Silk Road from Asia Minor to China and India. While the core of the collection comprises large sections of Parthian, Persis, and Sasanian coinage, it also included selections from the Achaemenids and the Hellenistic empires of Alexander the Great and Seleukos Nikator, whose issues were the first ever struck in Persia, as well as the smaller kingdoms of Charakene and Elymais.

The collection also has modest, yet impressive, groups of coins from those cultures that existed on the periphery of Persia–the Kushan Empire, the Indo-Parthians, the Indo-Skythians, Khwarazmia, and the Iranian Huns. All of these cultures were influenced by, and, in turn, influenced, the indigenous Persian groups that were respectively contemporary with them. While coins of most of these series are readily available, the collective quality and rarity represented by the Sunrise Collection are unprecedented, save for those collections in the greatest public museums. For nearly a half-century, the collector focused on acquiring exceptional specimens for this collection, and his skill in choosing the pieces is self-evident.

CNG is honored to offer in Triton XVIII the first portion of this impressive collection, comprising the Achaemenid, Macedonian, Seleukid, Baktrian, and Kushan sections of the book.

A few of the individual highlights from the Sunrise Collection featured in Triton XVIII are:

Johnston has interpreted this remarkable reverse design as a relief map of the hinterland of Ephesos, which would make it the earliest Greek map and first physical relief map known. On the right (north) are the mountains Tmolos and Messogis between the river valleys of the Caÿster and Maeander, to the left of which are three mountain ridges (Madranbaba Dagi, Karincali Dagi, and Akaba Tepesi). Johnston follows Six in suggesting that the coins were probably struck under the Persian general Memnon at Ephesos, circa 336-334 BC, in order to pay his army after he had captured the city, but before his defeat by Alexander at the Battle of Granicus in 334. However, Johnston’s theory has been the subject of some doubt, most recently by Leo Mildenberg.

The attribution of the walking-lion series of Mazaios had originally been given to the mint of Tarsos, but Newell argued that they more likely were struck at Myriandros in his study of that mint in AJN 53 (1919). Later, J.D. Bing, in AJN 1 (1989), argued for an alternative attribution of the Myriandros coinage to the mint of Issos. While most numismatic works continue to follow Newell, Casabonne’s significant study of Cilicia during the Persian period convincingly returns these coins of Mazaios to the mint of Tarsos (cf. Casabonne, pp. 215–7).

The appearance of Baaltars on this issue is significantly different from the relatively standard depiction of the deity on other coins of Tarsos. While the deity is typically shown nude to his waist, here the figure is fully clothed with attire that closely resembles that on the figure that appears on the royal Persian coinage struck at Sardes. More importantly, though, is the headdress on the figure. Baaltars typically wears a laurel wreath or no headdress, while this portrait shows the figure wearing an elaborate headdress. In a recent article, Frank Kovacs analyzed the type, and argues that this figure is actually the Great King Artaxerxes III Ochos, in the guise of Baaltars, and the headdress is the combined crown of Upper and Lower Egypt, thus his appearance here is as pharaoh of Egypt (cf. F. Kovacs, “Two Persian Pharaonic Portraits” in JNG L [2000]; see also M. Thompson, in MN XII [1968], pp. 11–2, who notes the figure wearing a “high crown of Egyptian type”). This is plausible, as Artaxerxes was the first pharaoh of the Thirty-First Dynasty of Egypt, and the date of his rule there, 343-338 BC, comports well with this issue under Mazaios.

O. Casabonne, while acknowledging that the figure here may represent a synthesis of Baaltars and the Great King, disagrees with the identification of the headdress as the Egyptian crown. Instead, he views the headdress as being a Phrygian style cap that is often depicted in contemporary art as being worn by warriors (cf. Casabonne, p. 121, fig. 8), but is here shown with the cheek guards in a raised position.

Nonetheless, it is doubtless that the figure here is a synthesized portrait of Baaltars and the Persian Great King. The fractional silver of this issue, interestingly, may be most instructive, as the headdress on the figure is shown wearing a crown that is identical to that on the figure of the royal Achaemenid coinage and his robes have interlocking circles reminiscent of the darics of Carradice Type IV Late (cf. M. Thompson, op. cit., p. 12).

Lot viewing for Triton XVIII will begin on Sunday, January 4th, from 1PM until 7PM in the Carnegie Suite, located on the 18th floor of The Waldorf-Astoria Hotel. The complete lot-viewing schedule for Triton XVIII is:

In addition, there will be an online, Internet-only, Session 5 for Triton XVIII, which CNG will be conducting as our Electronic Auction 342, and will run online concurrently. E-Sale 342 will feature over 1,000 lots, including further selections from the Sunflower Foundation/MoneyMuseum Collection, and will close on Wednesday, January 14, 2015.

Printed catalogs for Triton XVIII will be available after December 1, 2014. To order a catalog, please visit www.cngcoins.com. Catalogs are $75 to North American addresses, and $100 to the rest of the world. Payment may be made by U.S. $ check or Visa/MasterCard. Catalogues will be mailed to customers on CNG’s active mailing list.

CNG is currently accepting consignments for its next mail bid auction, CNG 99, scheduled for May 13, 2015. The consignment deadline is Friday, January 16, 2015.

For further details and any additional information, please contact CNG, Inc. at:

The New York International Numismatic Convention is the United States’ most prestigious numismatic event targeting the needs of the world and ancient numismatic communities. The 43rd Annual NYINC will be held at the fabled Waldorf-Astoria Hotel, located at 301 Park Avenue, New York, NY 10022, between 49th and 50th Streets. The dates for the 2015 NYINC are Saturday January 3, 2015 through Sunday January 11, 2015, with bourse activities taking place Thursday-Sunday, January 8-11, 2015.