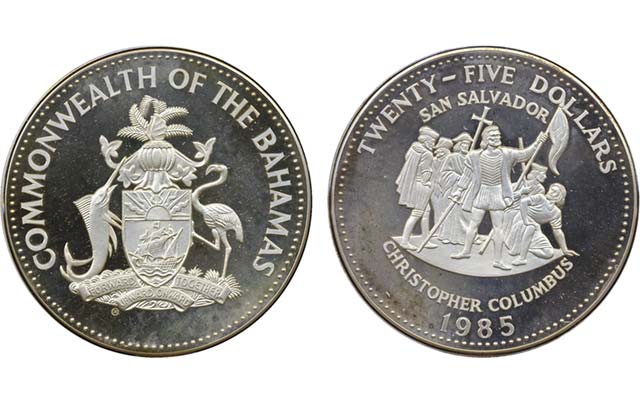 By 1985, big silver coins were coming from a number of world mints but none were a full 5 ounces. This Bahamas issue commemorating Columbus’ arrival on San Salvador weighs 3.5 ounces and was one of several big silver world coins issued in 1985.

This is the third part of a feature by Rita Laws exploring the growth in popularity of 5-ounce silver coins over the past four decades.

Once Panama paved the way for large silver coins, it was only a matter of time before a nation issued a 5-ounce silver coin. But in between, a bevy of issues approached but just fell short of that significant size.

By the mid-1980s, big silver was all the rage on the world collecting stage. Several nations winked at the 5-ounce mark but none committed until 1986.

The Bahamas issued two large sterling silver $25 coins in 1985. The San Salvador Christopher Columbus commemorative coin weighed 3.5 ounces. The other, slightly larger at 3.8 ounces, had a twin flamingo design, a nod to the beloved Bahamian Flamingo $2 coin minted between 1966 and 1991.

Collectors looking for these coins at online auction sites such as eBay should know that these are often sold to this day as 5-ounce silver coins, when they clearly do not weigh that much.

When buying any large silver coin, especially those minted before 1986, it is a good idea to check a reference book for the exact weight or ask the seller if there is a certificate of authenticity listing the official weight.

Online buyers should also be careful about purchasing 5-ounce medallic coinage and fantasy coins marketed as legal tender bullion. A few of these that appeared in 1985 and 1986 include the Liechtenstein 10-taler piece, the Austrian 5-unze piece, the Netherlands 5-daalder piece, and the Chinese Panda silver 5-ounce medal.

All of these are listed in the sixth edition of Unusual World Coins, a medallic coinage and fantasy coin reference book by Colin R. Bruce.

Also in 1985, Singapore issued a large silver medal with the design of an ancient sailing vessel called a “junk.” The medal also stated its weight and its purity level as “.999 fineness.”

This was significant for two reasons. First, many big silver medals at that time were still made to the .925 fine standard or .99 fine. This medal proudly proclaimed a triple-nines purity. Second, the Singapore Mint would be one of the first mints in the world to issue a true 5-ounce silver coin (for Samoa), just one year later.