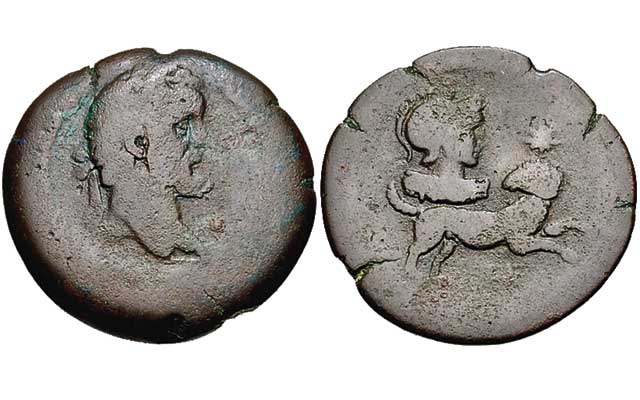 A bronze drachm of Roman Egypt is part of a Zodiac series during the eighth year of the reign of Antoninus Pius. This example shows Mars in Aries. 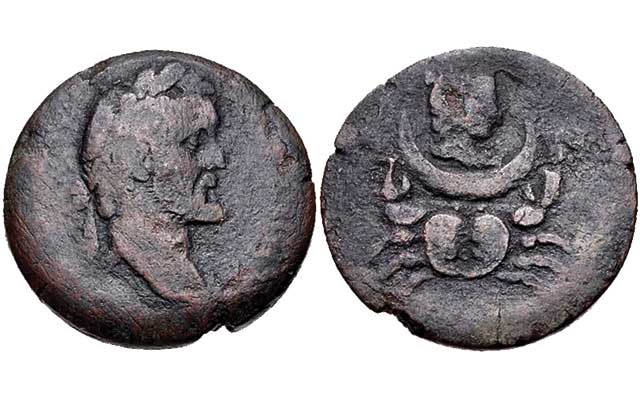 Another bronze drachm from a Zodiac series of Roman Egypt coins shows Selene (the moon) in Cancer.

The Roman Egypt Zodiac drachms are among popular issues of Roman Provincial coins.

Both drachms offerd in the sale were issued in Alexandria circa A.D. 144 to 145, a period when there was an “immense output” of Alexandria’s coins, according to the firm.

The Zodiac drachms, mythological types, are among a host of issues that appeared in that year.

“One explanation for this activity centers on the celebration of the renewal of the Great Sothic cycle, the point when the star Sothis (Sirius) rises on the same point on the horizon as the sun,” the catalog reports. “This cycle of 1461 years began early in the reign of Pius in A.D. 139, and apparently prompted a renewal in the ancient Egyptian religion, while the coin types also stressed the connections to the Greco-Roman Pantheon.”

Antoninus Pius appears on the obverse of both examples in the sale.

The first example shows on its reverse Mars in Aries, with a ram leaping right.

The coin is Fine, according to the firm, with a brown patina.

The other highlighted coin shows Selene (Moon) in Cancer. A draped bust of Selene faces right, with a crescent moon below that, underneath which appears a crab.

This example is also Fine, but has brown and green patina, and has some scratches from cleaning.

Both coins are estimated to realize $150 U.S.

This auction includes coins from the BCD Collection, offering coins from Thessaly and the Peleponnesos. Also available in the Greek section is an array of Judaean issues in silver and bronze.