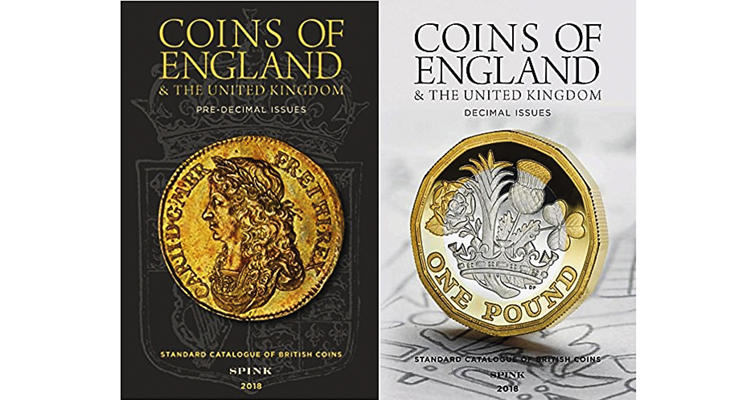 The annual reference published by Spink features pre-decimal issues in a hardback volume and decimal coins in a paperback edition, totaling 806 pages.

The 53rd edition of Coins of England and the United Kingdom is now available in the United States and remains a two-volume set for the third year in a row.

The yearly classic published by Spink features pre-decimal issues in a hardback volume and decimal coins in a paperback edition. The set totals 806 pages with color illustrations throughout. The book lists updated coin prices that reflect current market conditions.

Coins of England and the United Kingdom highlights every major coin type from Celtic to present, covering the Roman, Anglo-Saxon, Norman, Plantagenet, Lancastrian, House of York, Tudor and Stuart periods. Modern milled coinage minted in 1561 during the reign of Elizabeth I and coins up to the present day are also included, according to the publishers.

The information is arranged in chronological order and divided into metals under each reign, further organized by coinages, denominations and varieties. Decimal issues under Queen Elizabeth II are separated from the pre-decimal coinages, and all decimal coinage since 1968 is listed in the paperback volume.

Other topics addressed include tips for beginners, numismatic key concepts and each coin’s historical information.

The Coin and Currency Institute has the books available for $48.50 per set plus $5.75 postage and handling. To order the books, visit the firm’s website.