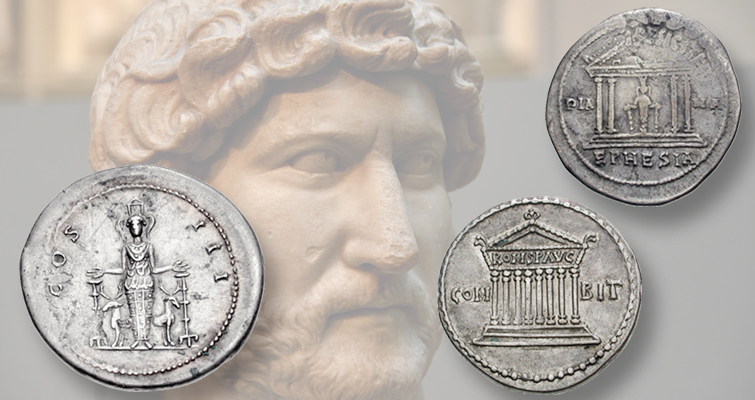 The reign of the Roman emperor Hadrian (A.D. 117 to 138) was extraordinary in many ways, not the least of which was coinage. His provincial issues are intriguing. Chief among the coins that Hadrian struck in the provinces were silver cistophori — large, silver coins he produced in two distinct phases. 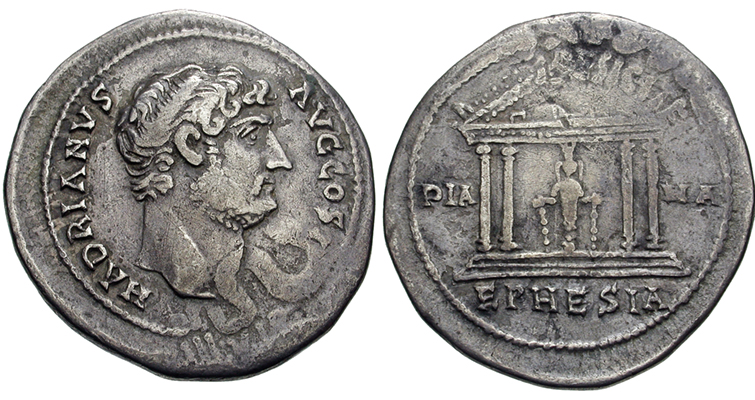 This Hadrian cistophorus from Ephesus bears vibrant traces of the coin over which it was struck — a cistophorus issued about 170 years earlier by the triumvir Marc Antony. 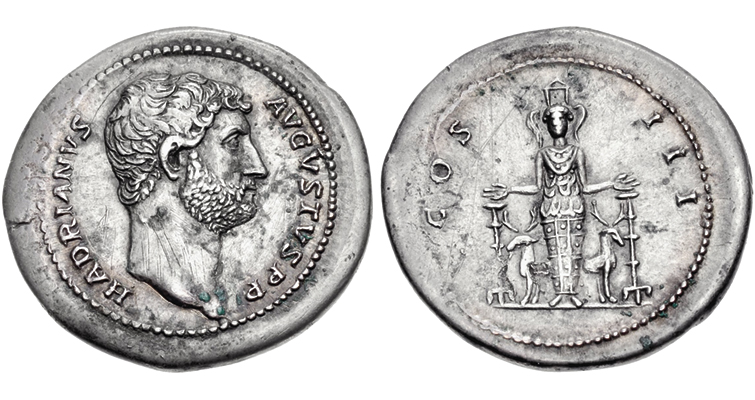 Hadrian’s portraits on cistophori often are of exceptionally fine style, as seen on this piece of an uncertain mint in Asia Minor that shows on its reverse a statue of Diana of Ephesus. 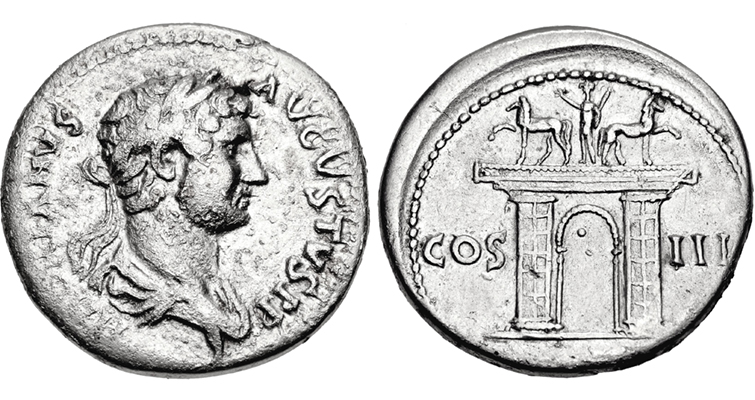 An elegant triumphal arch appears on the reverse of this cistophorus of Hadrian. It’s from an uncertain mint in Asia Minor and appears to be unpublished in the standard references. 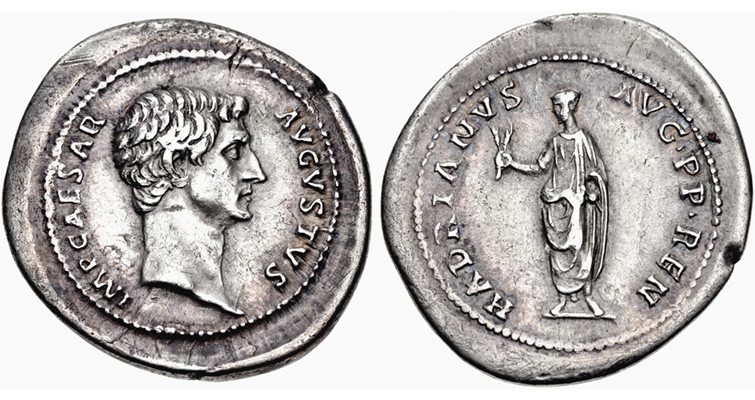 Among Hadrian’s most intriguing cistophori are ‘restitution’ issues portraying Rome’s first emperor, Augustus. Its types suggest a connection to the Eleusinian mysteries. 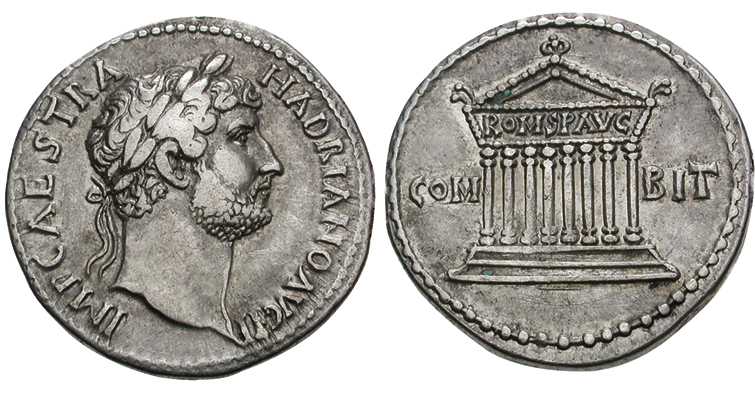 Separate from Hadrian’s Asia Minor cistophori of circa 128 to 132 are his Bithynian issues of circa 136 to 137. They were struck on new planchets and their circulation range was limited.

The reign of the Roman emperor Hadrian  (A.D. 117 to 138) was extraordinary in many ways, not the least of which was coinage. His standard imperial issues have always been of great fascination to collectors, and his provincial issues are perhaps even more intriguing.

Chief among the coins that Hadrian struck in the provinces were silver cistophori — large, silver coins he produced in two distinct phases. The first occurred circa 128 to 132 at a number of mints in the Province of Asia, the second circa 135 to 136 in the Province of Bithynia at its principal mint of Nicomedia.

The first issue was produced by overstriking old cistophori withdrawn from circulation to be used as blanks for the new cistophori, most of which typically bore the portrait of Hadrian. Almost all of the re-purposed coins were then-antique issues of the warlord Marc Antony (issued in 39 B.C.) and Rome’s first emperor, Augustus (issued circa 28 to circa 18 B.C.).

It’s remarkable that these early cistophori had served their monetary purpose so well, having circulated for 146 to 171 years by the time they were withdrawn, only then to be re-purposed as planchets for an entirely new coinage.

The overstriking was far from perfect, and traces of the designs from the original Antonian or Augustan cistophori often remain, verifying the source, intermingling with the fresh designs of Hadrian. One example features on its obverse the bold remnants of a coiled serpent from the Marc Antony undertype, as well as parts of that coin’s original inscription on the reverse.

Hadrian’s second issue of cistophori was of an entirely different character. Instead of being struck for general use in the Province of Asia it was meant to form a new coinage for the Province of Bithynia, a region north of the Province of Asia. The inhabitants of this region, apparently, had never used many cistophori. In this case there was no overstriking, and fresh planchets were created.

It is possible that all of these cistophori were valued at four imperial denarii. Originally, this impressive denomination had been valued at three denarii, but according to researcher Kenneth Harl, by the reign of Hadrian it was more appropriate to value the new cistophori at four denarii because of reductions, prior to Hadrian’s reign, in the weight of the denarius.

Harl contends that a valuation at four denarii would have prevented the new cistophori from being earmarked as an undervalued coin. In fact, it would have meant that the new coins were slightly overvalued, which would have helped cover the costs of minting and would have assured they remained in local circulation rather than being melted or exported.

It’s important to note that not every scholar agrees that Hadrian revalued the cistophorus. Among those who do not agree is William Metcalf, who wrote the standard reference on the series. He suggests that the recoining was intended to counter abuses by bankers who took advantage of a policy in which they accepted only fresh coins at face value, and discounted all others.

Since the only cistophori in circulation during Hadrian’s time were significantly worn, this may have put cistophori at an economic disadvantage, even though their weight remained “full” considering the weight reductions that had occurred since the originals were struck.

Though there is every reason to believe there was an economic need for these remodeled coins, ideas vary on why Hadrian undertook the recoining. Some scholars, in fact, see it as a reflection of Hadrian’s panhellenic program and his interest in the Greek cities of Asia Minor, for he was a strong supporter of Greek culture.

Metcalf has identified numerous mints in the province of Asia at which the new cistophori were struck, and he suggests the die engraving at all but four mints (at most) was performed by just one engraver per mint. Because so many mints were in operation in different parts of Asia Minor, there is quite a variance in engraving styles, ranging from the somewhat crude to truly elevated works of art.

Another interesting feature of Hadrian’s cistophori is the reverse types, which are remarkably varied. Typically, most of the mint cities used this opportunity to create reverse designs that celebrated their patron deities or otherwise highlighted some notable aspect of local culture. Often times they chose to depict local attractions, such as cultus statues, temples or monumental arches.

Hadrian’s most peculiar cistophori are the “restitution” issues that bear the portrait of Augustus, rather than his own. Hadrian had always tried to foster a close connection with Rome’s first emperor, and this coinage underscores that effort.

The reverse inscription on these coins includes REN (meaning renatus, or “reborn”), which perhaps alludes to how Hadrian — like Augustus — had been initiated into the Greek Eleusinian mysteries, and thus was “reborn.” The fact that Hadrian appears on the reverse holding grain ears backs up this premise since it is emblematic of Demeter and Persephone, the Greek goddesses who presided over the mysteries.

In all, the Romans had made just a few concerted efforts to strike cistophori. The first ones had been during the age of the Republic, when a variety of officials operating in Asia Minor found occasion to strike coins to pay soldiers and to increase the regional money supply.

Then there were the significant productions under Marc Antony and Augustus, followed by a smaller effort by the Emperor Claudius (A.D. 41 to 54).

After Claudius, however, the only noteworthy effort was made by Hadrian. The Emperor Septimius Severus (A.D. 193 to 211) later created a series of lower-weight cistophori that today are seldom seen. Though it’s possible most of these Severan cistophori were melted rather than buried, and that, in fact, the issue was much larger than we suspect, it most likely was just a modest effort that soon was abandoned — and which turned out to have been the last attempt. 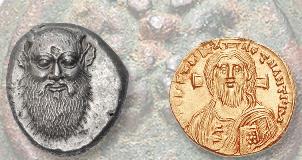 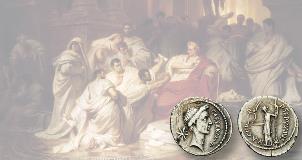