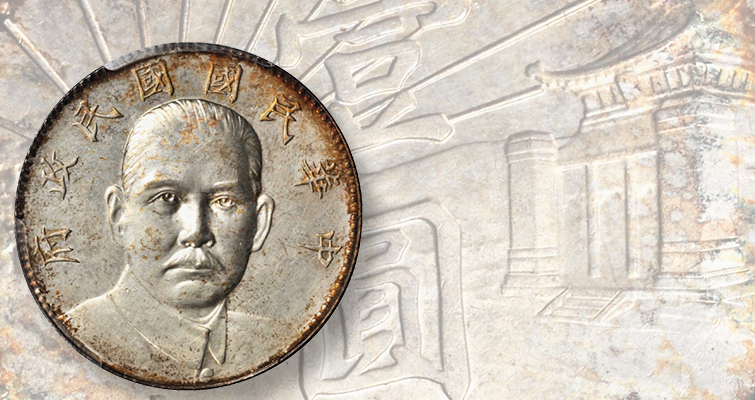 A 1927 pattern silver dollar from China shows an incomplete mausoleum dedicated to Sun Yat-sen, the ruler featured on the obverse.

Soon after Sun Yat-sen died in 1925, the founder and first leader of the Republic of China was honored in numerous ways.

Construction on a mausoleum began, and before it was finished, a silver dollar was commissioned in his honor.

A 1927 pattern for this dollar, designed by engraver Richard Placht from the Austrian Mint, reflects the unfinished state of the mausoleum. The pattern, which has a mintage of 480 pieces, highlights Stack’s Bowers and Ponterio’s Aug. 24 to 26 auction in Hong Kong.

Though the coin was attractive, the design was destined to be met with disapproval.

The depiction of the mausoleum is stylistically correct, but Placht, who never saw the site, based his design on a supplied drawing of the incomplete site, and so the pattern design omits a series of steps, not in the drawing, that lead to the face of the mausoleum. Also, the engraving of Sun Yat-sen met disapproval from authorities in China, who claimed it barely resembled his actual appearance.

The Mausoleum pattern was not adopted for regular production, though other coins were issued in Sun Yat-sen’s honor.

The example in the auction is graded Mint State 61 Secure by Professional Coin Grading Service, and has an estimate of $20,000 to $25,000.

Want to learn more about Chinese coins? Check out these Coin World stories!