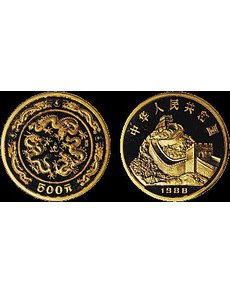 A modern, low mintage Chinese coin highlighted bidding during Bowers and Ponterio’s Nov. 16 to 19 auction of world and ancient coins and paper money.

The highlight of the auction was a Year of the Dragon .999 fine gold 500-yuan coin from 1988, the first year a coin having those specification and that denomination was issued for the Lunar series in China. With a reported mintage of 300 pieces, the coin is among the rarer of modern issues, certainly for the 5-ounce gold size.

The coin, graded Proof 69 Ultra Cameo by Numismatic Guaranty Corp., realized $26,550, including the 18 percent buyer’s fee. The auction of world coins and paper money realized an estimated $2.1 million with the fee.

In addition to the modern (1979 to the present) Chinese coins, paper money lots constituted a strong portion of highlights of the auction.

The complete listing of lots with prices realized is posted online at the firm’s website, www.stacksbowers.com.

Canada, 1924 Dominion of Canada $5 bank note, P-35, dated May 26, 1924, but printing of 2 million notes was “not released until 1934 and roughly a third of that number actually entered circulation,” Professional Currency Grading Service Choice About New 58 Premium Paper Quality, $17,110.