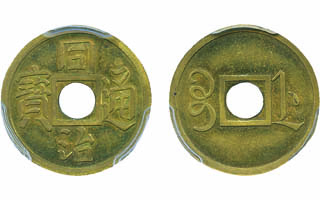 A rare, undated (circa 1866) brass pattern cash coin for Chekiang Province may have been struck for an official visit to Paris and the Paris Mint.

A highlight is the “very rare” circa 1866 Chekiang Province brass cash pattern, an example of the first Chinese-style round-hole cash, similar to the contemporary Hong Kong issues.

According to research in Richard Wright’s book, The Modern Coinage of China 1866-1949, The Evidence in Western Archives: “The Imperial Chinese authorities showed little interest in the machine minting of coins until the 1880s. Therefore the fact that the Paris Mint struck a pattern Chekiang Province cash coin as early as 1866 is somewhat of an enigma, particularly as the mint officials there have no evidence or knowledge of any further French involvement with the Chinese coinage.”

According to the firm, Paris Mint records states that only three of the patterns were struck but Wright argues that there may have been more, and the pieces could have been created solely for the purpose of an official Mandarin dignitary’s visit to Paris. Baldwin’s suggests that the pattern was struck for the European visit of Pin Ch ‘un, the Chinese Secretary of the Imperial Maritime Customs to Europe, which included Paris and its mint.

Baldwin’s suggests that the example in the auction is “possibly the fourth known,” but no provenance of the others is available.

Circa 1944, the notes issued by the Reserve Bank of India, Calcutta, are signed by C.D. Deshmukh and depict King George VI in profile at the right.

The example on offer in this auction is one of six known.

The Extremely Fine coin has an untrimmed, jagged edge.

The auction is scheduled to be held in the Crystal Conference Centre at the Holiday Inn Golden Mile in Kowloon, Hong Kong on April 3.

The catalog is posted online at www.baldwin.co.uk and online bidding with no additional buyer’s fees is available through the website www.the-saleroom.com.