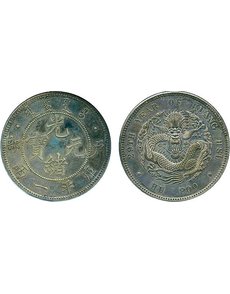 The market for Chinese coins has expanded in the past three years, as evidenced by the results of an Aug. 25 auction in Hong Kong.

Baldwin’s and Ma Tak Wo Numismatic Co. Ltd. jointly conducted Hong Kong Coin Auction No. 51 at the Holiday Inn Golden Mile, in Kowloon, Hong Kong. The firms offered Chinese and other Asian paper money, coins and medals (with some world lots also included) in the public auction. The auction, Baldwin’s 51st during 25 years of conducting auctions in the region, realized $5,256,675, including the 18 percent buyer’s fee, “the highest total of any of Baldwin’s sales in the Orient,” according to the firm.

The 1,064-lot auction was conducted in conjunction with the Hong Kong International Coin Convention. A total of 857 lots, or 80.5 percent offered, sold.

The coin was one of many that Baldwin’s had sold in 2008 as part of the Norman Jacobs Collection, when it sold for $103,500, including a 15 percent buyer’s fee.

Many other examples of items from the Jacobs Collection offered in the September auction realized multiples of what they sold for just three years ago, including an undated (1902) silver 5-cent pattern from Chekiang Province that was struck by the Heaton Mint in Birmingham. It realized $129,800, compared to $46,000 in the Jacobs Collection auction in 2008.

Edward Baldwin, company chairman, was thrilled with the results.

Baldwin said the “fantastic results” are “the perfect outcome to our 51st auction and our celebration of 25 years in the Orient. The result of these many years of auctions and the tens of thousands of coins and banknotes sold can be measured by the increased level of numismatic activity at our auctions. ... Many things have changed in the numismatic world over the last 25 years but our commitment to numismatics and to Asian numismatics in particular, has never faltered.”

The firm noted that about one-in-seven lots sold to online bidders bidding live, the highest percentage of live Internet bidding for the firm.

The offering of paper money in the auction also experienced high demand, as “the shift in interest from traditional to alternative investments has seen the banknote market flourish in recent months,” according to the firm.

Full results of the auction are posted at the company website, www.baldwin.co.uk.

China, General issues, undated (circa 1858) pattern silver mace, Kwan Ping, Kann 926II, “Kann thought these pieces were struck in England by the Royal Mint, London, but this cannot yet be confirmed,” PCGS Specimen 62, $51,920.