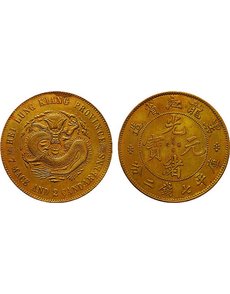 An undated Dragon pattern dollar struck in brass in the name of Heilungkiang Province highlights Champion Hong Kong Auctions’ sale No. 15, scheduled for Aug. 26 to 28. Little is known about the pattern, including where and when it was struck, but it is one of just three examples offered at auction since 1985. The coin has an estimated value of $250,000 to $500,000.

Chinese numismatics are offered in the 15th auction from Champion Hong Kong Auctions, scheduled to be conducted Aug. 26 to 28 at the Hyatt Regency Hong Kong in Kowloon, Hong Kong.

Highlighting the auction is an undated Dragon pattern dollar struck in brass in the name of Heilungkiang Province, the northernmost province among the three Manchurian provinces.

It is unclear when and where the rare pattern was struck for the remote, sparsely populated province, with experts suggesting the 1890s, when most of China’s other Dragon coinage was being made, according to the firm.

Another theory suggests that it was struck sometime after Manchuria’s administrative reorganization in 1907, when Heilungkiang shed its military provincial status to become a regular province with a civilian governor, according to the firm.

Chinese mints in Kirin, Mukden and Wuchang have been suggested as possible sources for the pattern (and a half dollar sibling that is part of the auction), but others have concluded that a mint in Germany, perhaps the Berlin Mint, was the source.

Regardless, the coin is extremely rare; though the number of examples is unknown, three examples of the dollar account for all five appearances at auction since 1985, according to the firm.

A highlight of the auction includes the J.C. Lee Collection of Chinese Copper Coins.

Lots are posted for free viewing online at the firm’s website, www.cghka.com/english. Print catalogs may be ordered from the firm for $50.