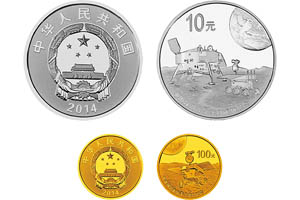 China is celebrating the successful landing of its first lunar lander and rover on the moon by issuing two new coins in 2014.

The Chang’e 3 mission landed on the moon Dec. 14, 2013, two weeks after being launched. The landing occurred in an area identified as the right eye of the “Man in the Moon.”

The rover, named Jade Rabbit, is gathering scientific data and exploring the moon’s surface in a different area than reached by U.S. and Soviet landing missions.

The People’s Bank of China announced Jan. 22 a pair of Proof coins that commemorate the successful landing.

The reverse of the 1-ounce silver coin shows the lander and the rover, which are photographing each other, with a portion of Earth in the sky behind them. Chinese words translate to “China Lunar Exploration Program’s First Successful Moon Landing” and the face value.

The reverse of the quarter-ounce gold coin depicts the Lunar Rover carrying out its exploration on the surface of the moon, against the decorative design of the earth, together with a Chinese inscription translating to “China Lunar Exploration Program’s First Successful Moon Landing.”

No artist was credited with the design in information from China Gold Coin Inc. The coins were struck at the Shenzhen Guobao Mint Co. Ltd.

The silver coin measures 40 millimeters in diameter and has a mintage limit of 20,000 pieces.

The gold coin measures 22 millimeters in diameter and is limited to 10,000 pieces.

The coins were just announced, so it will be some time before they are available in the United States.

PandaAmerica is an official distributor of China’s coins; at press time, the firm did not know when it would receive the coins and what price it would charge.

For more information telephone PandaAmerica toll free at 800-472-6327 or visit it at www.pandaamerica.com