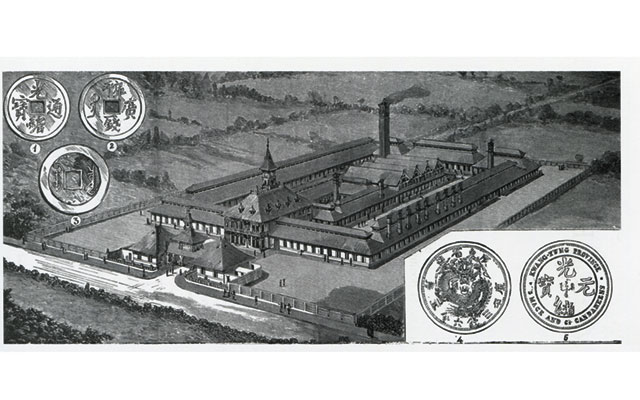 When it began producing coins in 1888, China’s Kwantung Mint was the world’s largest, with capacity to produce 400,000 silver dollars and some 2.58 million copper coins daily. 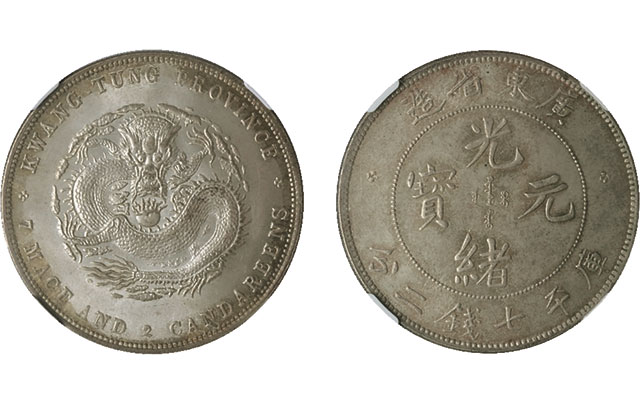 An undated (1889 to 1908) silver dollar coin (7 mace, 2 candareens) was struck at the young Kwangtung Mint, at one time the world’s largest mint.

When China built its first modern style mint, it had to rely on outside help before the facility could become fully operational. But once it opened, the mint was the world’s largest.

China’s first coining facility to use modern technology was the mint in Kwangtung Province, authorized in 1887. Machinery, dies and other equipment were ordered from the Heaton Mint in Birmingham, England, arriving in China in 1888.

An undated (struck from 1890 to 1908) silver dollar (7 mace, 2 candareens) coin from one of the earliest series of modern, machine-struck coins made in China highlights Champion Hong Kong Auctions’ Nov. 30 sale in Macau.

When it opened, the Kwangtung (Canton or Guangdong) Mint was the largest mint in the world, measuring 200 meters long and 130 meters wide. It operated 90 minting machines at a time the U.S. Mint in Philadelphia was operating six machines or fewer, according to Michael Chou, president of Champion Hong Kong Auctions.

Before providing the Kwangtung Mint with equipment and dies, the Heaton Mint struck a limited number of Proof or Specimen examples of the first series of Chinese coins. Once the Kwangtung Mint was properly outfitted, it took over production of the circulating issues.

At Kwangtung’s Mint, four Japanese-made presses each struck as many as 100,000 silver dollars daily, and 86 smaller presses produced up to 30,000 copper coins per machine daily, according to a May 19, 1888, article in The Graphic, a London weekly, provided by Chou.

The first silver dollar series minted was dubbed the “Seven Three Reversed Patterns,” the “seven three” referencing the silver standard of 7 mace and 3 candareens used for the dollar coin. The “Reversed” in the title reflects the order of the English and Chinese legends, which are reversed from what later became standard.

Officials changed the legends in 1889 to include an English inscription surrounding the dragon design, and at the same time changed the weight standard; these silver coins are based on a weight equivalent of 7 mace, 2 candareens.

The dollar coin in the auction is graded Mint State 65 by Numismatic Guaranty Corp. One of the finest known examples, the coin has an estimate of $20,000 to $40,000 U.S.