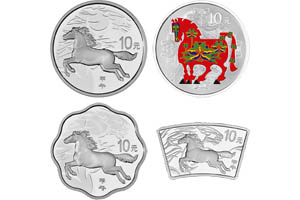 Variety is one hallmark of the annual Lunar Calendar Zodiac series from China’s mints. Four different versions of the 1-ounce silver 10-yuan coin are available, with two designs and three shapes composing the offering. 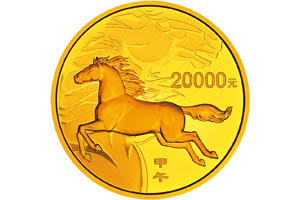 This is the first year China has issued a 2-kilogram gold coin for its annual Lunar Zodiac Calendar program. The coin is denominated 20,000 yuan and has a mintage limit of 100 pieces.
Previous
Next

Just in time for the Year of the Horse, China’s 2014 coins in its Lunar Calendar series are now available in the United States.

The coins were released Oct. 10, and the domestic market in China receives immediate access. However, for the coins to enter international markets takes several months, according to William Graessle, vice president of sales for PandaAmerica, a distributor of Chinese coins.

Graessle confirmed that his firm received the coins during the week of Jan. 20.

Under the Lunar Zodiac calendar, the Year of the Horse began Jan. 31. Each year is designated for one of 12 animals in a sequence, with attributes of those born within each year said to be influenced by their birth animal.

Seven .999 fine silver coins and nine .999 fine gold coins are available, and each features one of two reverse designs.

Twelve coins bear the common reverse of a running horse with the background pattern of a decorative horse head, the face value and the words of “Jia Wu” (which means Year of the Horse) in Chinese.

The 12 coins with this design are:

Four coins feature a common reverse showing a folk traditional horse (colorized) in the foreground and flowers considered auspicious in the background, also with the face value and the words of “Jia wu” in Chinese.

The four coins with that design and the selective color are:

All of the coins carry a common obverse design with the national emblem of the People’s Republic of China, a lotus and fish symbolizing a bountiful year, the name of the nation in Chinese and the year date.

This is the first year China has issued a 2-kilogram gold coin as part of the Lunar Calendar program.

The only other change with the program is the increase in mintage limit to 10,000 pieces for the kilogram silver 300-yuan coin, up from 3,800 for the 2013 Year of the Snake coin.

All other mintage limits and specifications remain as they were last year.

The coins are minted by Shenzhen Guobao Mint Co. Ltd, Shenyang Mint Co. Ltd and Shanghai Mint Co., Ltd., and nothing distinguishes between the issues struck at the separate mints, according to officials.

Dealer PandaAmerica offers collectors in the United States all 16 coins in the 2014 program.

The 5-ounce silver coins have mintage limits of 20,000 pieces each; the round, colorful version costs $739, and the rectangular coin is $759.

The kilogram silver coin is priced at $2,599, and the gold kilogram (with a mintage limit of 18 pieces) has a price available upon request.

The price for the 2-kilo gold coin, which has a mintage limit of 100 pieces, is available by calling PandaAmerica.

The set with the plain tenth-ounce gold coin and 1-ounce Running Horse silver coin, both in the Running Horse design, has an edition limit of 120,000 sets, and costs $579.

The set with the colorized tenth-ounce gold and 1-ounce silver coin, both in the Folk Horse design, also has an edition limit of 120,000 sets, but costs $629.

The third-ounce gold and 1-ounce silver fan-shaped coins (both in the Running Horse design) are offered as a set limited to an edition of 30,000, priced at $979 per set.

The flower-shaped half-ounce gold and 1-ounce silver coins (both in the Running Horse design) are available in a set with an edition limit of 8,000 sets, for $2,895 per set.

For full details of the coins, or to order them, visit www.PandaAmerica.com or telephone the firm toll free at 800-472-6327.